Set Your Phase To Stun 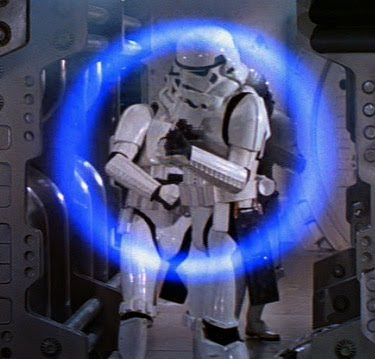 Four. I mean set your phase to four, as in “Phase Four of Captain Jim Bob’s Space Adventure.” Another Sunday, another trail workday on our “secret” trail project (well, secret to anyone who doesn’t use the Internets or live nearby.) After my near frostbite-inducing road ride, Lunchbox was ready to get out and do some digging in the dirt. We tried to recruit The Chili Man, but he was run down from way too much working. I don’t blame him for not wanting to join us for even more work.


It had warmed up a bit after the short ride to the local woods, and we got even warmer once we started working. Phase four was a long, twisty downhill that shot you back into the woods, and we had already completed some of it last weekend (until we ran out of time.) The rest of the new section was cleared out, and the trailbuilding began. Lunchbox went through and trimmed the tree branches, making a nice path for us so we wouldn’t get decapitated. He does good work with those loppers.


We had quite a long section to build this time, but we made a lot of progress. After getting to a nice stopping point, we decided to test it out. Lunchbox went first. 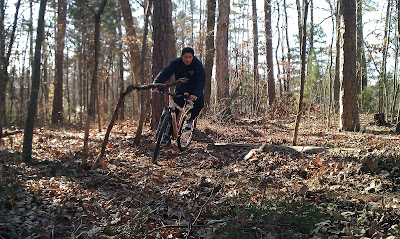 Funny, the lighting in that photo makes it look like there is no trail. Let’s keep it that way.


After we both took a spin (no photos of me), we had a surprise visitor. 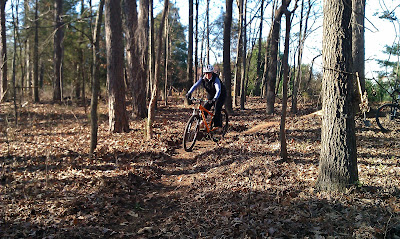 Yup, Little Miss Sunshine rode over to take a ride. She was preparing to take her bike over to Sherman Branch for some hot laps, but took a slight detour to test our new neighborhood trail. She seemed to like it, but had one slight complaint. It seems that the log rollover that I repaired last week was a little too steep. Upon further inspection, I realized what the issue was. Since Lunchbox has been testing on a 1X9 and me on a singlespeed, neither of us have a large chainring up front. Little Miss Sunshine, The Chili Man, and Chili Junior all have these hideous things, and they were hitting the top log with it. Lunchbox and I promptly dumbed it down a bit so it can be enjoyed by all.


Little Miss Sunshine parked her bike on the trail until we were finished, and made sure that we did a good job. 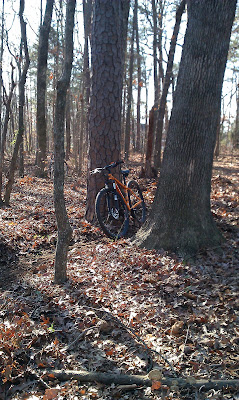 After she left, we got back to work. Since Phase Pour goes pretty far back in the woods, we were getting out of sight of our bikes and the tool stash. I grabbed everything I could, and told Lunchbox to walk the trail to make sure we didn’t need to make anymore “improvements.” 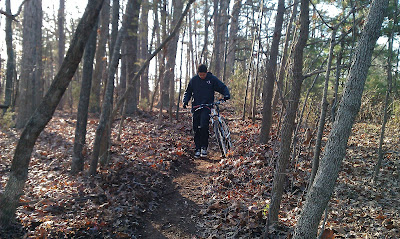 We got to the bottom of the hill, and we were faced with a dilemma. The brush is pretty thick, and it would require a shitload of clearing out. The other alternative was to cross through an old, half buried barbed wire fence, so we picked the lesser of two evils: clearing the trail. It was taking a lot longer than expected, and we had to call it a day. It looks like we only need another hour or so to get Phase Four completed, and then we can have a nice little uninterrupted loop to ride. After that it’s on to Phase Five.


We have big plans for Phase Five, but we have to finish the main trail first. I’m hoping that The Chili Man can help us out this weekend, because we’ll be building some features and will somehow have to transport them to the trail. I can’t wait.
Posted by TheMutt at 7:05 AM