Let It Slip Away 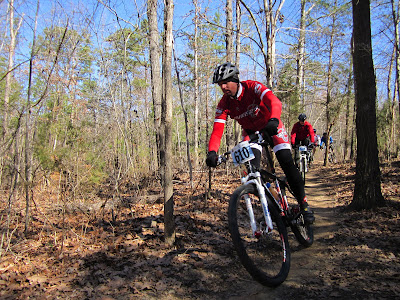 Last race of the Winter Series.

I was a little bit nervous.


While this is only the beginning of a long season (and dare I say only a “training” series), I still had a little bit on the line. I was sitting in 4th overall, and had to keep from pissing it all away by doing something stupid.


Lap one was well, a fun lap. I didn’t shoot off the line too fast at the start. I knew I could make up for my place during the race, so I didn’t care about where I was on the first lap. I even made sure to let local photographer Alex Hawn get ahead of me. I mean, who wouldn’t want to be entertained by a guy with a big-ass afro wig on his helmet riding through the woods? 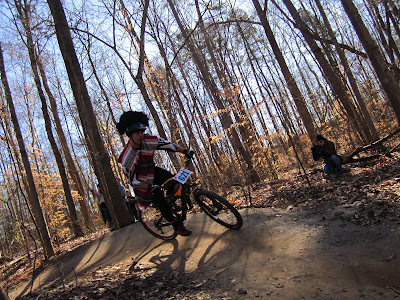 He took a break from snapping photos and decided to mix it up with the big boys.


So anyway, the first lap was pretty fun. When I got to the fire road though, it was all business. I sprinted past a few of the guys in my class, and focused on the leaders. I was in fourth place, and I wanted more. I passed through the start/finish line with the leaders in sight, and knew for sure that I would catch up. I gunned it and tried my best to get them. 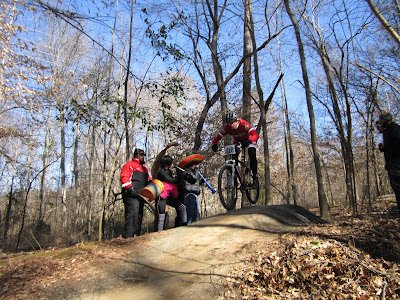 See the cheering section? They went all out and cheered us on while wearing costumes. Awesome.


Right after that, I caught up to my pal Dennis (in the class that left before us), and he gave me a clear shot to pass. I went around, and tried my best to catch the leaders. I made one small mistake though. I clipped a tree with my handlebars, and I was violently thrown to the ground. I don’t remember much of the crash, but Dennis said he saw my head slide across the ground. All I remember was ending up on my feet facing the wrong way, watching several people pass me by. Bye bye fourth place.


I hopped back up and tried to get on my bike, but I noticed that my chain had dropped. I eventually got in back on, but I was way behind. I climbed up the rock garden and headed towards the fire road. 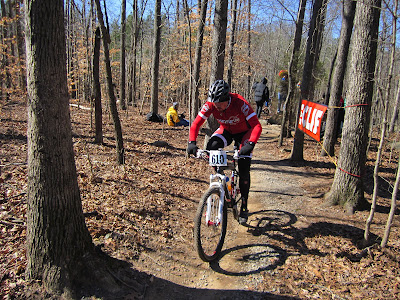 See the hole in my tights? I would have to wait until later to see the full extent of the damage.


On the next lap I hauled ass and eventually caught up to Big John, but he wasn’t gonna let me by without a fight. He pushed me to ride faster, but I wasn’t sure if I could hang on. He passed me at the start/finish line, so I stayed on his wheel in the woods and decided to try to put a big gap in when we hit the fire road again. When we got there, I gave it all I had. I went by him, and mashed my way to a comfortable lead. I wasn’t finished though, since Rod was still up ahead and trying to get away.


I had just left Big John, but Rod proved to be more of a challenge. I had the overall series lead on him, but he could steal it away by beating me by a few places. I made it my goal to catch him before the race was over. I passed everyone that stood in my way, even if they weren’t in my class. 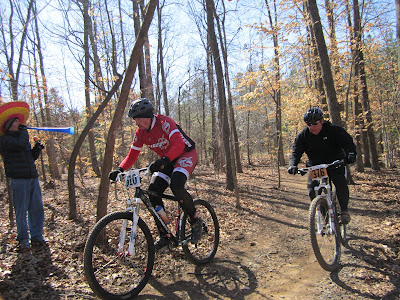 I saw him up ahead, and I sprinted to try to get closer. When I crossed the start/finish line, I saw him rounding the corner to enter the woods. I pointed at him to let him know I was coming after him. I hoped my little mind game worked, and I concentrated on getting closer so I could make my move on the fire road. After carefully navigating the downhill stuff, I mashed up the climb to the rock garden. 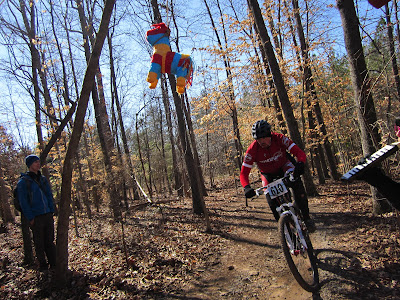 Not even a piñata could stand in my way.

WTF, a piñata? Yep. They would raise and lower it when people rode by. It was friggin’ hilarious, but I think some of the more “serious” racers got upset by it. Too bad they are too busy being serious to have fun. Screw 'em if they can't take a joke.


Anyway, I hit the fire road and saw Rod up ahead. I crept up behind him, and at the last minute I announced that I was passing on the right. I stepped it up to get by him as fast as I could, because I sure as hell didn’t want to fight him off the rest of the race. He didn’t catch up at first, but I eventually saw him trying to catch me. I put it all out there and tried to leave him. When I heard the call for the last lap, I left it all out on the trail.


I didn’t crash anymore, and I hung in there to secure 4th place for the day. When the race was over though, I had to let Little Miss Sunshine tend to my wounds. 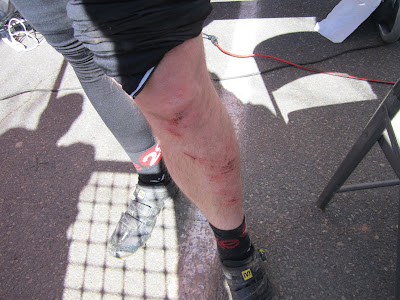 She had just the thing to make me feel better: 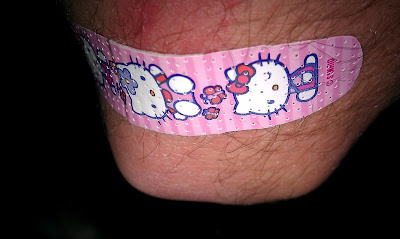 Now it was time to head to the afterparty/awards ceremony and get my grub on. 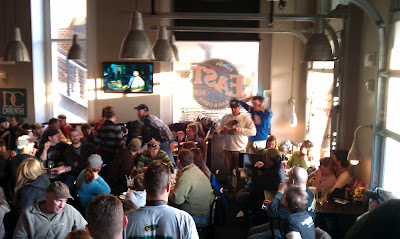 Specifically, I had some fish tacos. 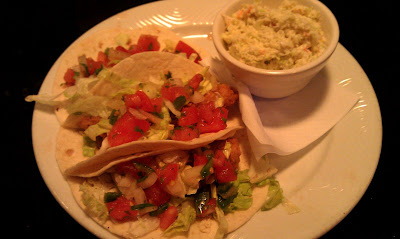 
Oh yeah, I ended up fourth overall for the series (they go five deep for prizes.) 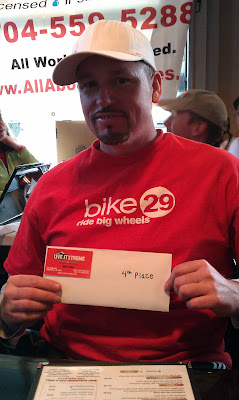 I’m sure I’ll get into the whole “analyzing my shitty performance” and stuff like that at a later time, so maybe today I’ll end with something else. I’d like to thank Rod, Big John, and Ben for forcing me to push myself harder that I thought I could. This time last year I was tenth overall, so I have obviously improved. I’m riding more now (training if you will), but without those guys pushing me I wouldn’t have ended up anywhere near where I was. Thanks guys. It was friendly competition, and I’m looking forward to the next time we meet out on the trail.


Maybe I’ll be back tomorrow with some kind of series recap, or most likely I’ll talk about something other than myself.


Thanks for playing.
Posted by TheMutt at 8:07 AM

Nice job... way to fight through the crash!! Sometimes they can be more of a mental block than a physical impediment.

And I like the new look to the site, very snazzy

Thanks man! It was definitely mental, but I still felt fast that day.