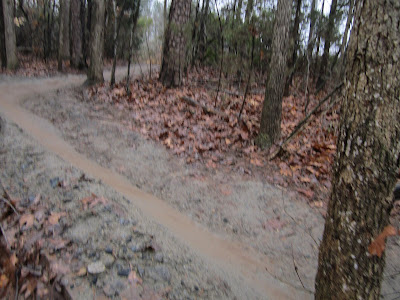 To go for a mountain bike ride, er race.


Race number four in the Winter Series did not get me very excited for many reasons. First, it had been raining quite a bit leading up to Sunday, and I knew the trails wouldn’t be in pristine, racer boi condition. Also, I was tied for fourth overall in the series, which meant that I had to actually do well if I wanted to break that tie. I was in for a long day of tough racing, or so I thought.


We took off from the line, and no one was sprinting hard to get to the woods. I ended up going in the woods in sixth place, with Rodney B. right on my wheel (he’s the one tide with me in the overall standings.) That first lap was pretty odd. Local fast racer Ryan Kelly was leading our group, and he pretty much took it easy. The pace reminded me of the final stage of the Tour de France, except that we weren’t popping champagne and patting each other on the back. It was odd, and I was getting a little antsy having to go so slow in a race. 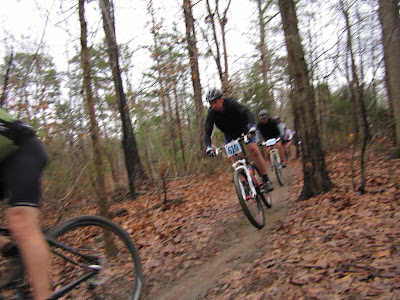 All photos by Lunchbox


As soon as we climbed out of the rocks and hit the fire road though, the pace picked up. I stepped it up myself, and passed one guy in my class. I knew the rest of the field was gunning for me, so I had to give it my best effort. We were finally going fast, and I had to actually concentrate to keep from busting my ass in the slick conditions. 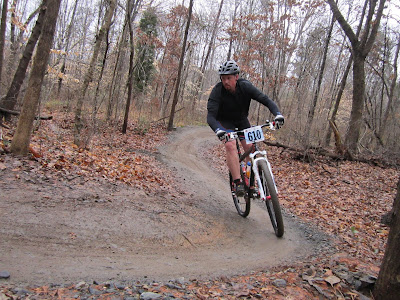 I kept with the lead group for a couple of laps, until we started lapping guys from the class that left before ours. I also passed another guy in my class, and still had the leaders in my sights. I was full of determination, or too much beer from the night before. Either way I felt pretty good. 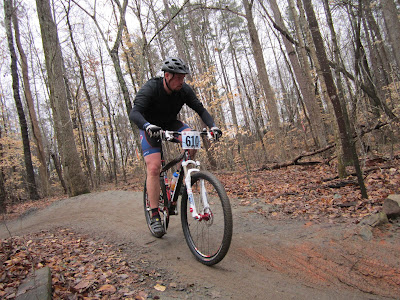 I went by another guy in my class on the fire road climb, and he tried to stick with me. Every time I turned a corner, I could see him back there. I stepped on it and put a bigger gap between us, but I (almost) ran into another problem: two guys hogging up the trail. I called out my pass, and they parted like the Red Sea, leaving me the sketchy option of shooting the gap between them to get by. I barely made it, and hauled ass to make up for the little bit of time I lost. I was pretty much in a full on sprint when I left the fire road. 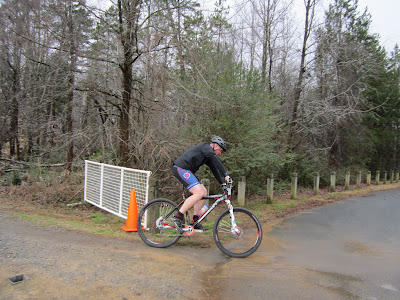 When they called out one lap to go, I didn’t see anyone in my class behind me when I turned the corner. I pushed it even harder, and nearly busted my ass in a slick corner. I didn’t go down, but it did slow me down a bit. I continued my blistering pace, wondering how far ahead of me the leaders were. One more climb up the rocks and I was home free. 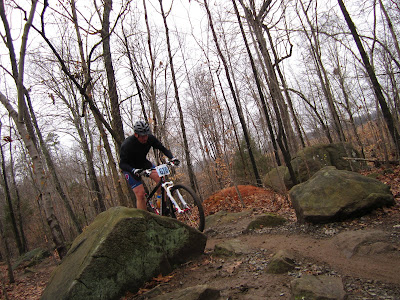 I saw one guy up ahead, so I shifted to a bigger gear and sprinted. I beat him across the line, but he was in another class. Damn it. I ended up in fourth place for the day, which broke the tie in the overall standings. The race was double points, so it looks like I’m cemented in fourth place overall. Well, unless something terrible happens next week.


Even though the trail was a little bit muddy, it was actually in pretty good shape. It wasn’t cold, so I really didn’t have anything to whine about. Maybe I’ll find something I can complain about and share it with y’all tomorrow.
Posted by TheMutt at 8:37 AM