Try Not To Explode 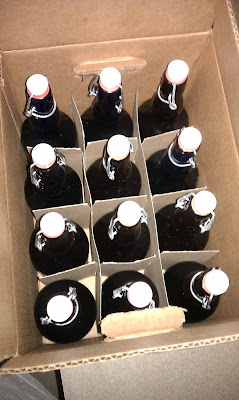 Okay, I was talking about me, not beer. Since I put a picture of bottles on here though, I guess I can talk about it for a minute.


I finally bottled my new IPA. After about ten days of fermentation, it was ready. It promises to be super bitter, but it still has a nice aroma. It tastes like a flat IPA now (since it hasn’t gone through the carbonation process yet), and hopefully the finished product will turn out just fine. I have a test bottle that I will try in about a week or so, and then I’ll know for sure. I can’t wait, but I am a little nervous. I hope the bottles don't explode while I'm away at work.


Back to the race, I did get on the course for race number two…without gears. After pushing a 193 heart rate and putting in my best lap time on my geared bike, my legs, lungs, and heart had been through enough. That didn’t stop me from getting out there again though.


I started out near the middle of the pack, and my legs were stiff as hell. After a few minutes of pedaling, I hit the downhill section and felt right at home. Once I reached that first climb though, I started to wonder what the hell I had gotten myself into. When I hit the fire road (for more climbing) a guy rode up beside me and asked if I was alright. I told him I was tired, and he said, “Why are you out here?”

Dumbass, it was my second race.


I promised myself at that if I could loosen up a bit during the race, that I would be sure to at least get by and finish ahead of him. As I crossed the start/finish line though, I wondered if I would even make it to the end. My legs hurt like hell, and I felt like I had no power. It’s like they didn’t even want to turn the pedals.


At that point I remembered a video I saw of pro cyclist Jens Voigt, and I told my legs to shut up.

My heart rate never got above 185 for this race (which was way better than 193 I guess), so at least I had that much going for me. As the race went on, I started feeling a bit better. Not good enough to compete, but I knew I could last the whole race. The fact that there were two separate cheering sections helped a lot, one led by Alex and his merry band of hecklers, and another led by Dale and Robbie, which later merged with the MadSS and his family. They kept me going on the climbs, and I wouldn’t have made it without them. 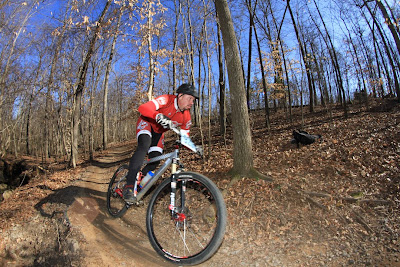 
Eventually I caught up to the guy I mentioned earlier, and passed him on the fire road. He got by me again after the start/finish line, and rode into the woods ahead of me. He was slower than shit on the downhill stuff though (most likely because he was a dirt roadie and afraid of mountain bike trails), so I made sure to get by him again on the climbs…even if it meant that my heart would explode. When the time came (at the fire road again), I turned it on and left him. When I got on the trail, I made sure to put in a big gap (again with help from the cheering section.) When it was all over I crossed the line after nine laps, and I was exhausted.


I finished 17th out of 21 racers, which probably doesn’t sound that great. However, I did beat four people that didn’t race earlier in the day. That was a moral victory for me. I’m starting to think this single speed thing is the way to go.


I walked around like a zombie for a while afterwards, but eventually I started feeling good. Two races in one day with no knee issues and decent results? I’d call that a success.


If you don’t think that’s a success for me, then you probably haven’t been reading this shit long enough.
Posted by TheMutt at 8:15 AM

Two races in one day is unreal, with some scary HR going on in the first... you are a beast!

You race multiple times a day and your heart is boundta explode!