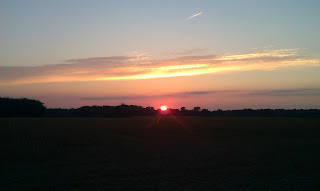 I can’t believe that I’m still going on about my vacation.  Somehow I still have things to talk about I guess.  Although no ride will come close to topping SSUSA for quite some time, I did get out on the bike when I got back to .  We visited a local favorite, Sprague Brook Park. 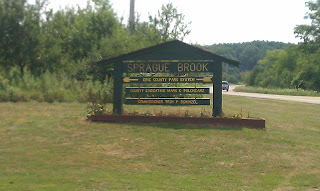 Since I’ve never been there before (and Little Miss Sunshine hadn’t been there in years), we had trouble finding the entrance to the trail.  We eventually did, and discovered that it was quite rooty. 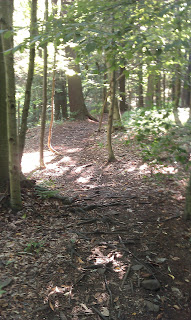 Since the little lady had been riding on the farm and with her mom on the local roads, she realized that her tire pressure was way too high for such a rough trail. 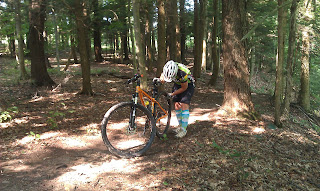 After about a half mile or so, we found what appeared to be the trailhead.  The kiosk in the middle of the woods gave it away. 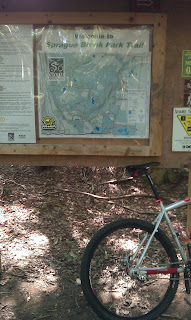 The actual trail didn’t differ much from the “trail to the trail”, and it was actually kinda fun.  Long, sustained climbs coupled with fast descents kept things interesting.  Since we were out for a fun ride, I stopped to take photos every so often. 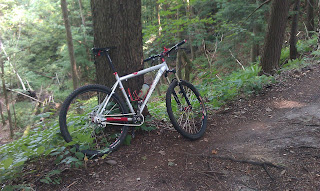 They made good use of the land, and even though we weren’t in the mountains there were plenty of fun things to do. 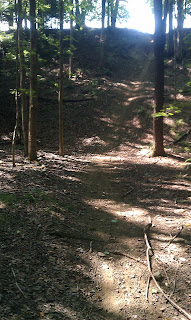 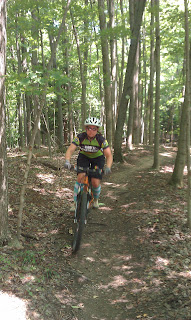 There were several gulleys all around the trails, which kept us on our toes.  One wrong turn and you would fall to your death (or at least have a painful hospital visit.) 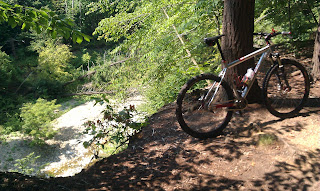 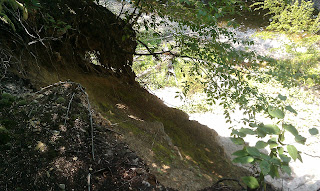 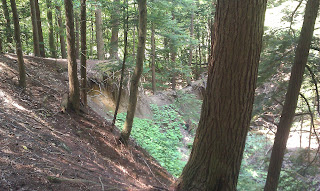 With only about ten miles of trail, it should have been a short, yet fun ride.  However, towards the end we started to get a little bored and it seemed like it would never stop.  That may have been because I was getting hungry, and I hadn’t had a beer in a while.  Since I was having withdrawals, we headed to the local beer store so I could stock up.

I picked up a few local brews, but the crown jewel of my search was a beer that has eluded me for several years now. 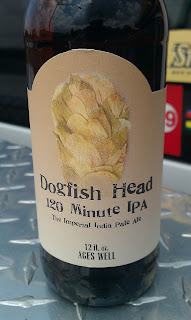 The Dogfish Head 120 Minute IPA.  At $14.99 a bottle, it’s really pricey.  But, it’s the best $14.99 I’ve ever spent.  Super hoppy (duh), but it tastes freaking awesome.  In fact, dare I say it’s more flavorful than the 90 minute version (which is way more plentiful and cheaper.)  I was surprised to find it in , but I guess they had plenty because everyone there drinks shitty Canadian beer.  More for me.

Since that was my last day there, we crammed as much shit as possible into a small amount of time.  After spending a good amount of time with my brother in law and my nieces and nephew, the little lady and I headed to some giant waterfall up the river a ways. 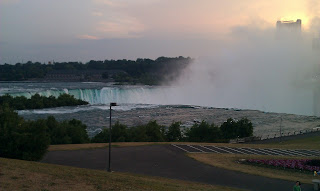 We stayed on the American side.  I was afraid to cross the border for fear of Peter asking me to smuggle some more shitty Canadian beer into the U.S. of A.  I think he was watching me from high above. 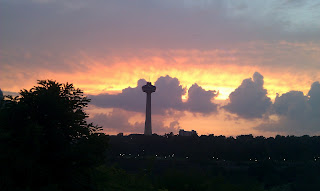 We headed back to late that night, and capped off our day with a few beers and a good meal.  The next day we hit the road back to .  It was a great trip, and I didn’t want any of it to end.

Especially since we stopped at brew pub in on the way home. 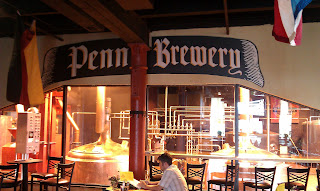 I guess we should get out of town more often.

Sounds like your vacation was boring, glad you went up there to chill.

Still waitin' on the head up your skirt story .....

That story has been told, just not by me.

Ah Sprauge Brook. Its like home for me...I am headed there next weekend for some riding and friend visiting. I helped build some of those trails, while my buddy Scott, a regular visitor to Charlotte to ride/race pretty much maintains them, as well as as running a bunch of races there. The trail has been getting rootier over the years because of the heavy use as its the closest trail to Buffalo.