A Little Bird Told Me


That I’ve been spending a lot of time out in the woods building trail.  I can’t remember if I mentioned this before (and I’m too lazy to look), but I made a friend out there a while back.  One day, I went out to build some trail all by my lonesome (a little over a month ago) and I noticed that a little bird was following me around.  As I moved along the trail, he (or she, but he from now on) followed me.  Every time I looked up, he was sitting on a tree right next to me, watching my every move.

I found it odd that he was so friendly, so I started talking to him.

I know birds can’t talk, but the way he was watching me I hoped that he would at least try to get a few words out.  Instead, he looked on as I dug in the dirt.  When the day was over, I said goodbye and went home.  I’ve been out there quite a bit since then, and there’s been no sign of him.  Well, that is until last Saturday. 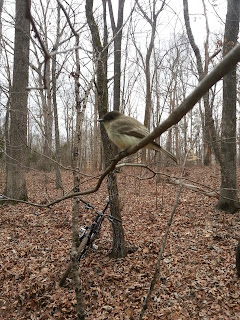 He was back, and followed me around again.  This time though, there were quite a few of us on the trail working, but he seemed to just be following me for some reason.  It was obviously the same little fat bird, and he was just as friendly.  Even when Irish Luke rode up, he didn’t fly away. 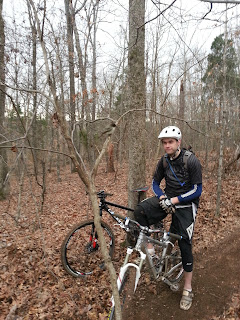 This time, we realized why he was taking such an interest in our trail building.  When we would dig up some dirt, he would swoop down and grab a big juicy worm.  We were doing the hard work for him, and he was rolling up like it was a McDonalds Drive Thru.

Anyway, the next day I was back out on the trail, and the only other person out there was TomTom.  I helped him finish a section that we had neglected. 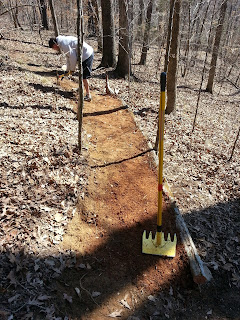 When we went back to the top of the hill to cut in some more trail, we noticed another bird watching us. 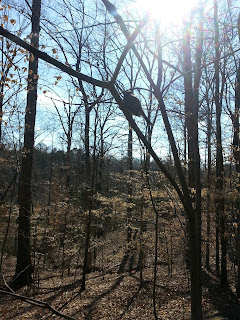 This wasn’t our friend from before, because he was a lot thinner.  However, he was doing the same thing:  watching us dig, then flying in for the quick meal.  The other bird must have told him what was going on, and that he could get a fast, easy meal.

No wonder the other one was fat.  The lazy bastard probably ate too much and couldn’t leave his birdhouse.

This new bird was a little more aggressive, following TomTom and I all over the woods and even running into us when we weren’t digging.  I hope they don’t bring anymore friends out there for the buffet, because I sure as shit don’t want to be attacked by a flock of angry birds. 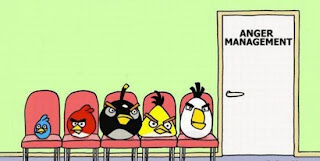 You know, because they can stir up some serious shit. 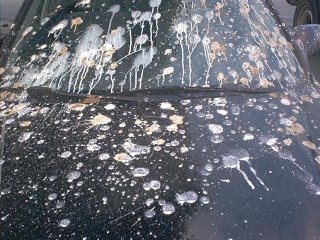 Damn, I’m really desperate for shit to talk about, huh?

Those are some smart trail birds.