I haven’t talked about a group ride in a while because well, we haven’t had one.  Our regular Tuesday night excursions at have been cancelled due to rain for the last few weeks, and I though our next one would be too.

In a effort to be more social, I’ve decided to try to keep our Tuesday night rides going throughout the year, and although we won’t be night riding anymore because of the time change, we will still get out to ride after work.  We started to rotate the rides around to different area trails, with our next stop being in Matthews, NC.

A storm blew through the night before, and since we respect our trails enough not to ride them wet, I kept hearing chatter about the ride being cancelled.  I got a chance to sneak out during lunch and check the trail conditions, and with a little wind and a warm sun the trail was in prime condition.

The ride was on.

We had a good group that met in the parking lot, including regulars TomTom, Good Guy Greg, Eastwood, and a few new faces.  The ride was super social, and we stood around a lot talking at different places all over the trail.  We even took the time to play on some of the new features out there. 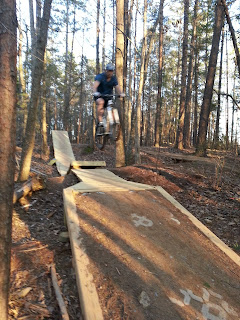 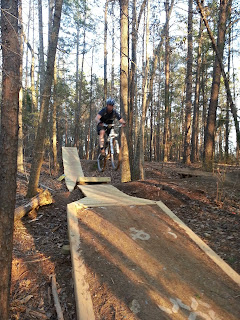 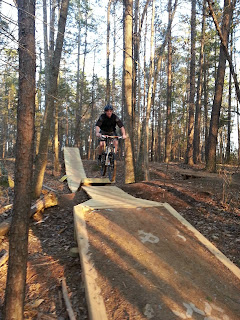 These photos are blurry, yes.  These guys were hauling ass.

While we didn’t get in a ton of mileage, we still had a great time.  In today’s Strava-filled cycling world, getting together to ride and shoot the shit with fellow mountain bikers is a welcome change.

And that’s what I was talking about by having more fun on the bike.  Screw that boring ass training crap.