From The Hills To The Flatlands

Lunchbox and I left at the crack of dark Saturday morning, heading down to the Bootleg Bangout 6 Hour Race down near   A little over three hours later, we were wandering around a local Navy base looking for the race.  I found it peculiar that I was lost in the middle of the woods on a military installation looking for a bunch of crazy endurance racers, but I was also starting to panic a little because time was running out.  I eventually called the MadSS to ask where he was, and he directed me to their location.  I found it, and I was already laughing about how “underground” this event seemed.  It wasn’t your typical cross country dirt roadie fest, so my mission to have fun was already heading in the right direction.

It didn’t take long to register, and Lunchbox helped me get our pit area setup. 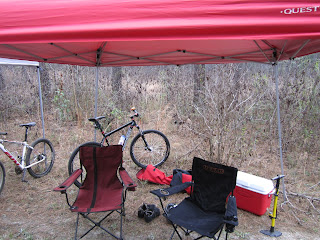 In most endurance races, I like to have a seat after each lap in order to “pace myself.”  I would learn later on that I didn’t need my fancy Maxxis chair this time.

We lined up for the start, and I didn’t even feel like I was in a race.  There were only four of us on single speeds, with everyone else running a full compliment of gears.  Running a 32X17, I felt like I had brought a knife to a gunfight. 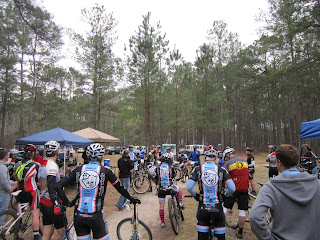 Like a dumbass, I lined up towards the front with the MadSS and Chris W (from Total Cyclist MTB.)  When we took off, I spun my ass off to keep up with the lead group. 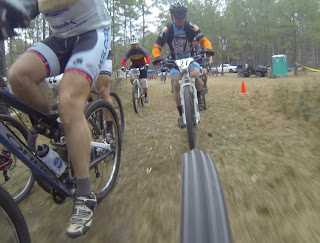 A couple of guys took off way ahead on the super flat trail, and I did my best to keep up.  A few people here and there passed me because I thought I couldn’t spin any harder, but instead of slowing down I cranked it up even more.  The trail came out on a short road section, and I passed three or four people.  I planned to go out in a blaze of glory…all in the name of fun.

The trail was really flat, but I settled in and enjoyed it.  There were a few slight ups and downs, but for the most part I was pedaling the whole time.  There weren’t many opportunities to coast at all.  Could I keep up this horrible pace for six hours?  I didn’t give a shit.  I was having fun.

Lap one ended, and I was still somewhere near the front of the group.  My trusty cameraman/sidekick/son was there waiting to capture the action 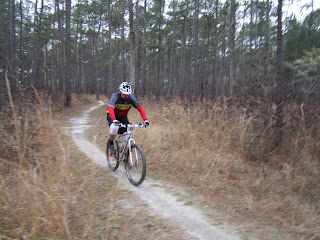 I didn’t really get tired at all, and the only time I was breathing hard was at the very beginning.  I stopped real quick after that first lap to grab my iPod and remove my GoPro from my helmet (video to follow at a later date), and I headed back out for lap number two.

I was feeling great, and I couldn’t believe I was “racing.”  I drove down to the Lowcountry to have a fun time, and I certainly was so far.  Towards the end of the lap though, my chain popped off.  I got in back on in a hurry, and realized that my EBB was loose (from my failure to properly tighten it when I changed the cog a few days before.)  I got back to the start/finish line without another issue at least. 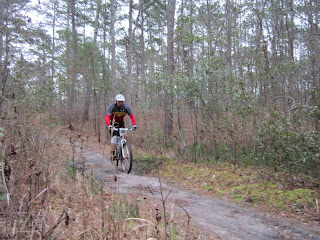 I had forgotten my Tülbag back in the truck, so when I got back I made sure to grab it.  I took a few minutes to make sure my chain tension was good and the EBB was tight this time, and headed back out.  I didn’t need a break at all, so I was a little upset that I had to stop.  Lap three went off without a hitch, and I didn’t loose ground to anyone…not even a geared rider.  I was still feeling good, but I realized that I hadn’t been drinking anything.  With the course being so flat, it’s not like I didn’t have a chance to grab my bottle.  If thought that if I was gonna last the whole six hours, I had better get to drinking.  My legs felt fine, but I knew for sure I would have problems later.  This lap went by pretty quick I guess, and in no time I was coming back up to the start. Lap four is when things got really interesting.  Since I’ve blabbed too much today, I’ll save the rest for tomorrow.  I mean, it was an endurance race, so this should be an endurance blog post.