This Kind Of Work Is Fun


I’ll try to stop complaining about my day job, because well, it won’t do any good.  Change is coming I think, and from now on I’ll do my best to make sure it doesn’t affect what’s going on in my bike world.  And right now, what’s going on is more work…

We had a “scheduled” work day at “The Trail”, and when I headed out of the house we were getting hit with another bout of winter weather.  Unlike the last time though, the snow wasn’t really sticking to the ground.  It still kept coming down though. 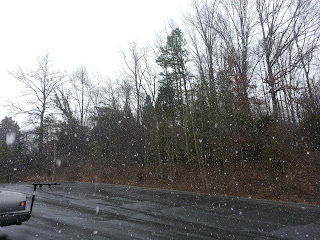 It wasn’t like we were having a blizzard or anything like that, so the work day was still a go.  TomTom suggested that everyone bring a bike this time, because we should actually try to enjoy what we have built so far.  I dusted off my little-wheeled squishy bike that hasn’t been out of the house in over two years. 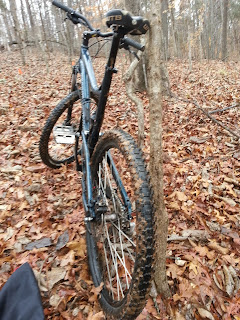 With five inches of travel, little wheels, and flat pedals, I thought that it would be fun out there.  It wasn’t going to be a serious ride anyway, so I brought the least serious bike I own.

TomTom and I were the first ones there, and we discussed our plan for the day.  Even Steven showed up and we eventually got to work.  After cutting in some new trail that we flagged a few weeks ago, we felt like we were once again making progress.  When we stopped to admire our handy work, out of nowhere we heard a scream…

Followed by some crazy European flying down the trail. 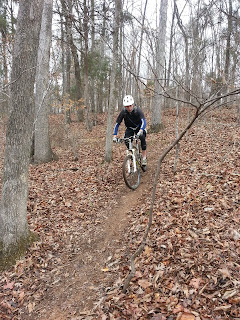 Yes folks, Irish Luke made his grand entrance, and he was having a blast.  When he finally reached where we were working, he said that he was worn out.  We knew we were building a tough trail, but to hear it from someone that rode it all at once made us feel pretty damn proud.

I rode a couple of sections here and there, and aside form the fact that I’m not used to tiny little wheels and flat pedals I had a great time.  This trail is turning out to be way better than any of us thought it would be.

We still have a ton of work to do though, but it’s the kind of work that doesn’t suck so bad.