And The Skies Opened Up

Sometime during lap three, the rain started.  It began as a light sprinkle that came and went, but as I rolled through the start/finish to begin lap number four…the bottom fell out.  Within minutes, buckets of rain drenched me and the trail.  It was so flat that the water had no place to go. 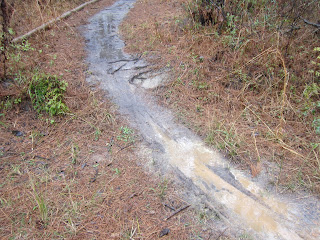 The temperature had dropped considerably, so along with the rain I was getting really cold.  I kept pedaling to stay warm, but the faster I went the colder it got.  It was kind of like being on a road ride I guess, but with roots and sand.  It didn’t bother me a whole lot during that lap (or so I thought), and in no time I was coming around the corner towards the pit area.

After four laps with no break, I decided I that I should stop for a few minutes.  I wasn’t really tired, but a break was a good idea.  It was sorta like driving down the interstate on a long trip…you should just stop every once in a while so you don’t get bored.

While I was in the pit, I ate a little bit of food.  While I was talking to Lunchbox, I started to shiver uncontrollably.  During that last lap I only had a small issue with my hands being a little cold, but stopping for a minute let it all catch up to me.  I was soaking wet from head to toe, covered in mud, and freezing my ass off.  I contemplated changing into dry clothes, but decided against it for some reason.  Instead, I ran over to my truck and threw on my old long sleeved Cane Creek jersey (right over my muddy, rain-soaked clothes), swapped to a clean (and dry) pair of Lizard Skins gloves, and got on my way.  As I rode off, I thought that I should’ve put on a hat under my helmet and changed my socks.

It was too late to turn back.

During that lap, I was still shivering.  My feet were numb, and I had a headache from the cold wind blowing on my head.  I was miserable, and I’m sure my pace slowed a bit.  After a little while, my buddy Lowcountry Joel came up behind me and asked how I was doing.

“My legs feel great, but I’m freezing to death” I replied.

He rode by and I didn’t have the motivation to chase him.  I struggled through that lap and finally came back to the pit area. 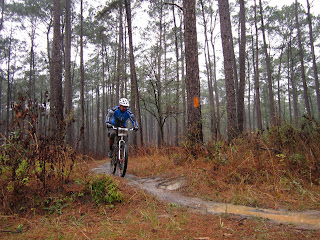 I wasn’t really tired, so I didn’t want to stop.  However, I saw the MadSS sitting down wrapped up in a blanket.  He was having the same issue as I was, so I talked to him for a few minutes.  I had warmed up a little bit, so I made myself go back out for another lap.

Lap six was better and worse at the same time.  My dry gloves had become wet already, and my hands were tingling from the cold.  Every time I hit a root with my rigid fork, I felt it in my bones because I was frozen from the inside out.  There were a lot of roots, so I was in pain the whole time.  Surprisingly though, my legs still felt as fresh as they did when I started.    There are only a couple of small climbs out there and I had plenty of power to stand up and mash to get up them quickly.  However, on one climb when I stood up I spun out, and almost toppled over.  I couldn’t feel my feet to tell if I was clipped out or not.  Luckily I was able to grab a tree and right myself, and in no time I was on my way again.  It was a short ride back to the pit area, where my kid was standing once again (braving the elements) to take another photo. 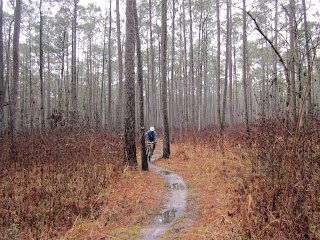 When I got to the start/finish line, I took a look at the clock.  I thought I had time for two more laps, so I gunned it through to hit the trail again.  My body was warm, but I still had little to no feeling in my hands and feet.  I picked up the pace, and this lap went by much faster.  I did notice something strange throughout the race though:  every time I went through the pit area I saw more and more people standing around.  They were dropping like flies, and that motivated me to keep going.  I rode almost the whole lap alone, until one guy came up behind and slowly passed by.

“I thought I was out here by myself” I said.

“There are only a few of us left” he said.

I was too stubborn to quit, and that made me push even harder.  I didn’t really give a shit about being cold anymore either.  I just wanted to get back and try to squeeze in one more lap.  I came out of one section that passes by the pit area (before you go back in the woods for a bit) and I saw my kid waiting again. 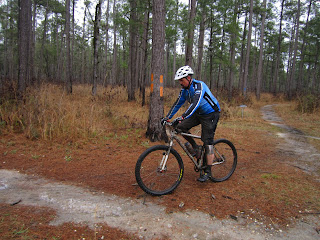 It had finally stopped raining (but it was still chilly), so I stopped for a second and took off my long sleeved jersey since I was feeling a little warmer.  One of the race volunteers yelled to me that I didn’t have to go out for another lap since I already had third place locked up.  I wasn’t sure that I heard him correctly (he was a little far away), so I asked Lunchbox what he said.

Damn.  I guess I knew I couldn’t win it (I didn’t enter the race for that anyway), so I must have backed off my pace a little bit.  Before long, I rolled through the finish line, just missing the cutoff to go out for one more. 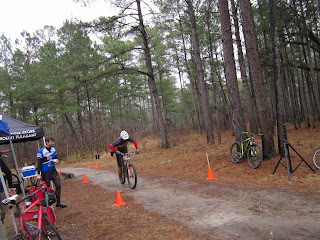 “No, but you can do another if you want to” someone joked.

No, thank you.  Six hours in the mud, cold rain, and on a rigid single speed was enough torture for the day.  When it was all said and done, I ended up with seven laps.  As it turns out, I must’ve misheard the guy talking to me because I ended up in fourth place.  Lowcountry Joel took the top spot, and he was also on a single speed.  I was pretty happy with my effort, especially racing against a bunch of people with gears.  If there had been a single speed class, I would’ve been second.

Not too bad for someone that just drove down there to have fun I guess.  I don't really care about the results because damn, it was fun.  Maybe I’ll do some sort of post race analysis or something tomorrow.

Maybe I'll even have the video done.