It Was So Fun…

That I can’t stop talking about it.

I mean, I drove three hours to “race” for six hours, got rained on, nearly froze to death, and even got covered in mud. 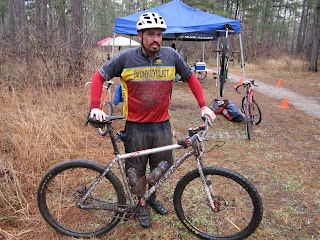 Although the Falcon (my SS bike in case you haven’t been paying attention) was covered in mud, the simplicity of having no gears or suspension was definitely an advantage out there. 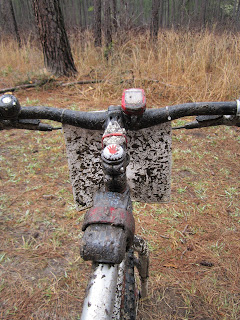 It wasn’t a total success though.  Sometime after the shit storm got underway, I noticed that my braking power had all but disappeared.  The pads were making a horrible noise, and if I ever had to make a sudden stop I found myself flying off the trail.  I rinsed off my bike at a local car wash right after the race, and I thought maybe that sound was because of all the mud in there.  However, when I took my bike apart later to check everything I found this: 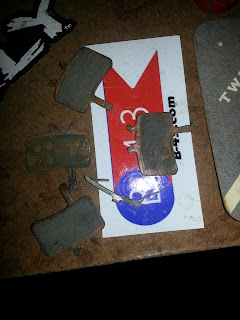 Wow.  No wonder I couldn’t stop worth a damn.  I didn’t really need my brakes too often anyway, and luckily replacing worm (or non-existent in this case) pads is an easy task.  While I was at it, I took off that tiny 17 tooth cog and put on a more “hill-friendly” 18.  The Falcon will fly again.  She may not look like much, but she’s got it where it counts, kid.

In other news, I finally finished my video from lap one.  You know, when the weather was still nice.  Since I have an older GoPro, I can’t see where the hell the camera lens in pointing.  So, the angle is a little off, but you get the picture.

“Get the picture?”  Geez, what the hell is wrong with me?

Anyway, I just want to say thanks to the flatlanders down in for making my “fun race” a great experience.  They had no control over the weather, but it was still an awesome event.  I hope I get a chance to go back down there next year.

Now I need to start looking for more fun shit to do.

Pulled the video up on the Tube of You, and you're alongside Liz Hatch and Tony Stewart...

Ya'll are so hott.