Off The Beaten Path


Since I knew I was skipping a race on Sunday, Saturday was gonna be all about fun.  Me, Good Guy Greg, and TomTom all wanted to have a fun ride, and we really didn’t feel like going too far out of town.  So, we all headed up to to ride a place we’ve never been before: 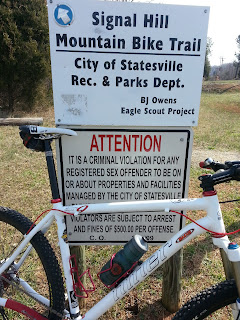 Don’t worry, I’m not a sex offender.  It was okay for me to be there.

At only around five miles long, we knew we weren’t in for an epic ride (that word is used to freaking much anyway.)  I flipped a coin that morning before I left the house, and fate decided that I should bring my geared bike for some reason.  Armed with way too many gears and plush suspension, we took off to explore a trail that I’ve been told by many that I should ride.

There were some of unique features there. 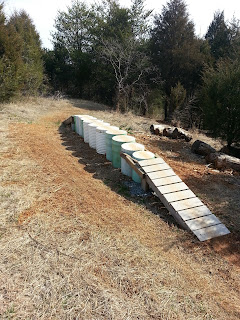 Not far into the first lap, we stumbled upon a pump track like no other in the area.  There were berms as far as the eye (or at least my camera) could see. 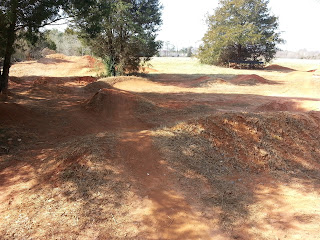 We all rode around there for quite a while because it was uh, fun.  I had almost forgotten how much fun it could be to ride a bike. 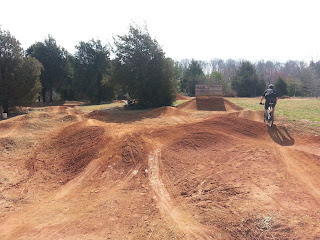 And neither did Good Guy Greg. 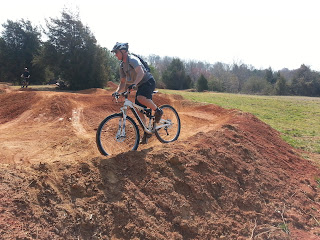 We eventually said goodbye to the pump track and got back on the trail.  It was fast in spots, tight and twisty in others, and just downright fun.  We saw rocks aplenty, big wooden features, and other assorted shit. 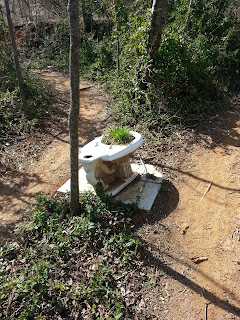 The features weren’t too difficult, but the fun factor was there for sure. 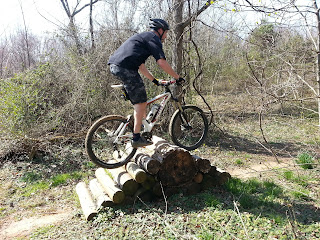 I don’t remember a huge amount of climbing, but it took us forever to get through that first lap because we stopped so much to explore everything.  That place was sorta like the little brother of my local favorite, Backyard Trail.  We got back to the parking lot and took a faster lap, and this time we knew what we were in for.  That made it even more fun.

While it was a pretty good ways up yonder from where I live, it was definitely worth the trip.  I sorta regret not riding it sooner, but I’ll be sure to make up for it in the future.  Skipping a Sunday cross country race to have fun did wonders for me mentally, so look for more of that as the “season” goes on.  Sure, I’ll still do a few XC races here and there, but only if I deem them “fun.”

For now, I’m sorta semi-retired from racing.  Well, until this weekend.

I’ll get into that later in the week, as well as the rest of our day on Saturday.  You won’t want to miss it.

Well, maybe you will.  Whatever.

It's been way too long for me to get to Signal Hill too! Glad you enjoyed it - they have done probably 2-3 years of new work since I've been there.

Comming back home for good this week!!! Yea! Local trails!!