I’ll Try To Keep It Simple 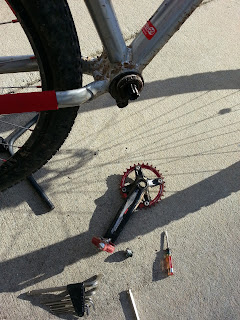 I don’t wanna be angry, but I do wanna ride my single speed more and more.  Many years ago when I was just a youngin’, I rode bikes with no gears or suspension.  BMX, old clunkers, or basically whatever my Grandaddy and I cobbled together out of spare parts.  It was fun to build bikes, and those homemade machines required little to no maintenance other than spraying some WD-40 on the chain (this was way before the days of ProGold mind you.)

Many years later when I started riding mountain bikes, I made sure they had all the bells and whistles, i.e. gears and suspension.  Over the next few years, I decided I didn’t need rear suspension, so I went with a hardtail.  Then, I removed a couple of chainrings up front to have a 1X9 setup.  During that time I talked to/rode with many single speeders, and I swore up and down that I would never ride one.  However, watching guys like the MadSS get stronger and faster riding one I thought that maybe I should try it.

I tried a few different bikes setup as single speeds, and it was more of a novelty than anything else.  Like, “Yeah, I rode my single speed to the store to get beer” kind of stuff.  Eventually I ended up with a spare 29er frame almost identical to the geared bike I was riding, and made that my first “real” single speed.  Well the one that saw any trail time anyway.  I rode it here and there, mostly on the easier trails in the area.  Eventually I started getting brave and taking it to the tougher trails, and I even entered my first single speed race.  A few months later, I rode it in at Single Speed .  Being around all those folks on one gear made me think that I was heading in the right direction with my choice to shun gears.  However, I went right back to my geared bike when I got home.  I broke that frame in a race, and rode nothing but SS for several months while I looked for a new geared frame.

The seed had been planted.

I got the new geared bike, and rode the shit out of for a while because it was all shiny and new.  However, I kept finding myself wanting to ride the SS more often than not.  Eventually I reached the point where I barely even ride the geared bike.  Early this year, I put a rigid fork on the SS to make it even more simplistic.  I thought for sure that I would hate it, but it turned out to be quite the opposite.  Now not only am I riding the SS more, I’m enjoying the lack of suspension when I do it.

Now, here comes the dumb part (as if the rest of this shit isn’t dumb enough.)

As the geared bike sits there getting no love, I came up with an idea of what to do with it.  Sometimes I may find the need to have some sort of suspension up front (like in the mountains or something), and to save myself the trouble of swapping out my fork before I ride I can just grab another bike.  I can remove the gears, throw on a chain tensioner, cog, and a couple of spacers and have myself another single speed with some squishy action.  If I ever think that I might need gears from some reason, the whole process can be easily undone.  Since I prefer to ride SS all the time now, the undoing probably wouldn’t happen very often (if at all.)

That sounds like a good plan to me, and it doesn’t make me angry even a little bit.

Now we’ll see if I actually follow through with it.  I’m pretty sure I’ll change my mind a few times.