Even though I just completed the build of The Greatest Short Track Bike on Earth, I did mention that I would be less than satisfied riding a brand other than Diamondback for the upcoming short track series. I took some steps to rectify the situation, which was mentioned on yesterday's post. SO, what’s in the box? Well, I’ll answer that. 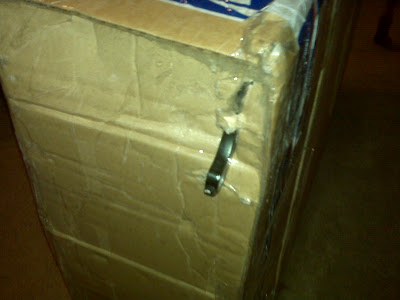 It seems that the contents are eager to get out too

I grabbed a box cutter (left over from some confiscated airline paraphernalia), and went to town. I was pleased to find a brand new, but “older” model Diamondback Response hardtail frame. It was a size 22 XL frame, just my size. 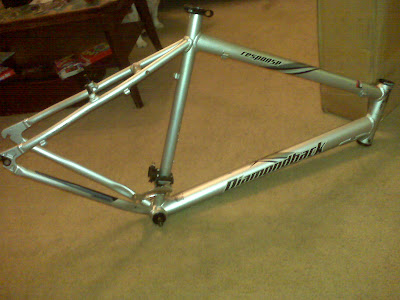 I’m sure by now you are all aware of my love for all things Diamondback, so you can imagine the relief I felt upon opening the package. The funny thing is, I never managed to take the Trek out for even a small test ride, other than the standard “in front of the house” test. I was ready to swap out the parts and get on my real short track bike. I hope everything I have will work. I guess it’s time to find out.

The first thing I wanted to do was dig up a better stem. I complained about the stem that I had left on the Trek, but it was actually pointless. I found a generic, yet lighter stem in my parts stash that would work well for this project, at least until I find a more suitable Easton component. I also had yet another suspension fork laying around, a RockShox Dart 3. Yeah, it’s not the greatest, but it is relatively light and it will do the job. I raced a whole season on it, so it’s functionality is well documented. I greased the headset bearings and cups, and installed the fork. 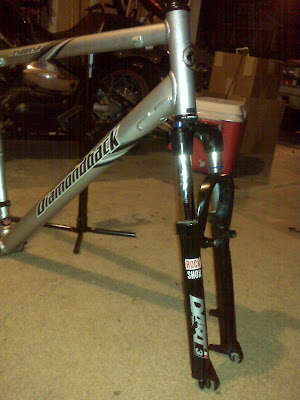 Next up would be the stem of course, and I was able to transfer the handlebar over with minimal trouble. This was “Bike Building for Dummies”, since I didn’t even have to remove the grips and shifters. I would eventually have to remove one of the grips and one shifter to install the remote lockout, but that can be done at a later date. Have a look at my shitty picture. 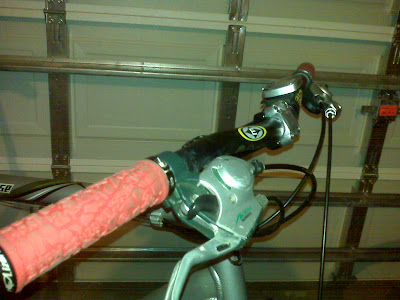 The stem isn’t any kind of fancy or anything, but it does the job. The Cane Creek headset and top cap will hopefully draw attention away from the sub-par stem, at least or now. Here is another less than quality photo. 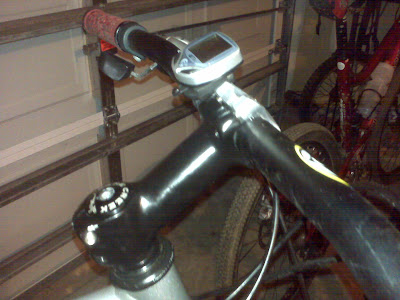 With a little more grease in my hand, I transferred the “jacked to the max” seatpost and seat to the new and improved frame. Did I mention that this frame is about two pounds lighter? Probably not, but it is worth noting. I hope it can withstand the force of my 225 pound ass (okay, that’s my total weight, not just my ass.) 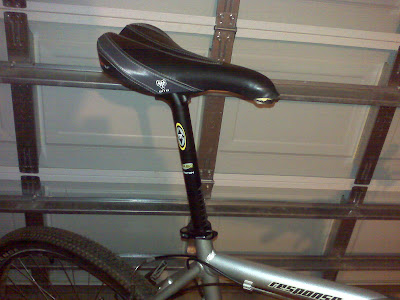 Next in line was the installation of the brakes and wheels. This was fairly uneventful, so I didn’t really take any pictures to document it. I used the same parts from the old bike, with only minor modifications to the cable housings. So far so good. 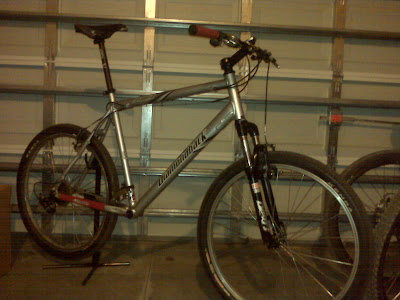 This thing is gonna be hard to pedal without cranks or well, pedals. I sort of ran out of time, so yeah I have a few things to do yet. Cables need connecting and cranks need to be installed. There are a few other odds and ends left, but hopefully I can finish up in a timely manner. My plan is to take a test ride on a local trail this weekend. I guess I should finish the build first. Maybe I can get some garage time tonight to finish up. Hopefully.
Posted by TheMutt at 8:52 AM