The Mutt’s Day Off 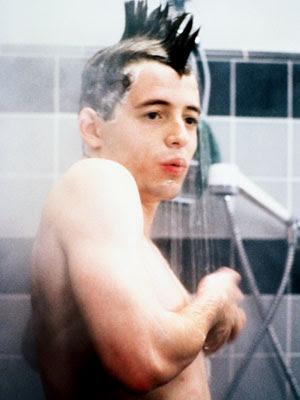 "Ferris Bueller you're my hero."

I told you yesterday that I worked late on Tuesday evening, so I had the next day off. I didn’t have any plans, because I didn’t think I would work long enough to justify taking the next day off. I was way off on my assumption. I left work at a little after 2:00 a.m. yesterday, and I drove directly home. No middle of the night, kinda drunk, passing the time by stopping at the Steak and Shake for burgers and crap for me. I just wanted to go home and sleep.

I arrived at my domicile, took a shower, and went to bed. The alarm went off at 6:00 a.m., and I had to get up to assist Lunchbox with his getting off to school routine. Yay. We left the house at about 6:45 with dogs in tow, and walked to the bus stop. I could hardly stay awake on our walk. All I wanted was to go back home and pass out. I didn’t get nearly the amount of sleep that I needed. After Lunchbox boarded his bus and the dogs did their business, I hurried back home.

I got in the door and headed directly upstairs. I hopped in bed and tried to sleep, but that wasn’t working out so well. I tossed and turned for a bit, and then I decided to just get out of the bed. “Maybe the Internets would entertain me while I became tired,” I thought. Nope. In fact, I started to feel more awake than before. I decided that I would go ride my beloved Goose, instead of wasting the day away trying to recoup my lost sleep from the night before. Where would I go? How about the Uwharrie National Forest? Sounds like a plan. 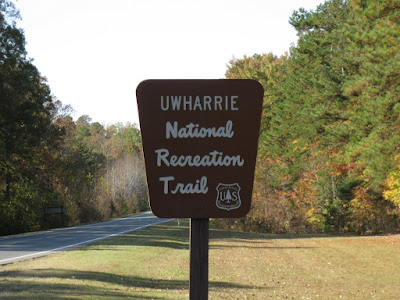 I grabbed a quick bite to eat, loaded up Goose, and headed out in the direction of Albemarle, NC, the hometown of Kellie Pickler. I’m not sure why I just told you all that, but whatever. I arrived less than an hour later in the Uwharrie Mountains, and I was ready to ride the Wood Run trails. I was in for 11.4 miles of steep climbs, sketchy rock gardens, and ears pinned back downhill. I was so excited. 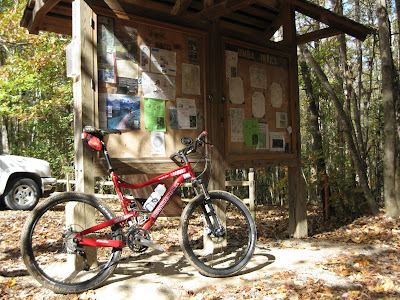 Goose was waiting for me to get ready.

Well, there is a 1.5 mile gravel fire road to get to the first loop. The ride seems like it takes forever. Today was different. It really did take forever. I ended up stuck behind some kind of work vehicles. There was a pickup truck, and then there was a giant wheeled machine of some sort. It had a long arm connected to a sawblade. It was really scary-looking. I figured it was some sort of tree maiming device bent on deforestation. I wanted to get away from it as soon as possible. They held me up for about a half mile, and there was no room to pass. 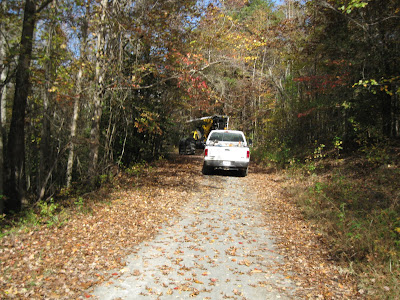 Eventually they veered off the road to cut some trees or whatever, and I was on my way. Next stop: Woodrun Hunt Camp. 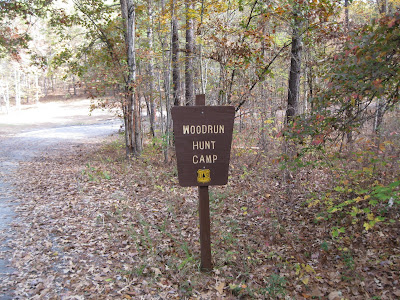 There wasn’t much to see at the camp, except for a sign telling you which way to go. 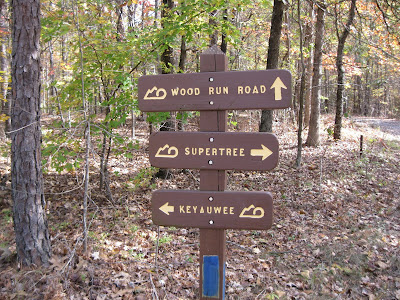 I started out on Keyauwee, which has some hellacious climbs through some gigantic baby heads and root steps. Oh fun. 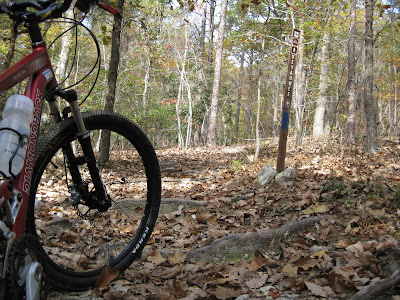 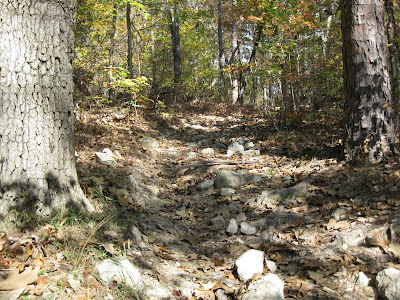 Look at all those baby heads.


Yes, it was hard to climb. However, it was worth every heart-pounding pedal stroke. The views at the top were nice. Blue skies, fall colors, and mountains. Oh yeah. Just take a look. 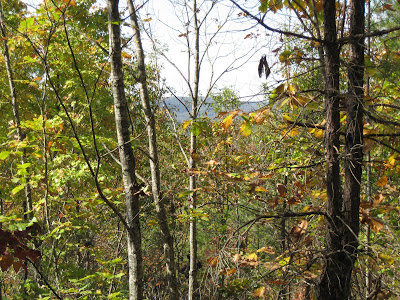 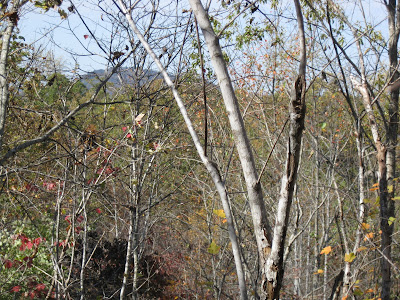 The Keyauwee trail was covered with dead leafy goodness, and it was pretty much a vegetable tunnel. I had a difficult time navigating the trail sometimes. I found myself veering off course often. I really had to pay attention to what was in front of me. Hidden baby heads and death traps are the norm at Uwharrie. The leaves just make it worse. 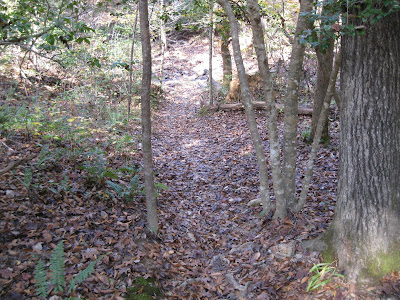 Is there a trail in here? 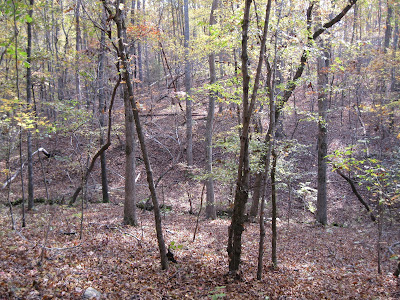 I finally made it out if the climbing, rocky, rooty hell that is the Keyauwee loop. I did have a little downhill fun, but the climbing pain was most prevalent. After about 5 miles, I arrive at the fire road, with a sign telling me the way to go. 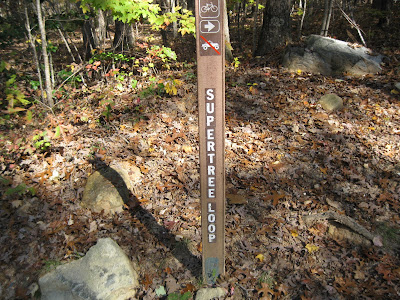 Ah, the Supertree loop. Ears pinned back downhill, or so I’ve heard. After my quick stop for picture taking, I was ready to get to it. Immediately I noticed that the leaves weren’t so bad on this side. 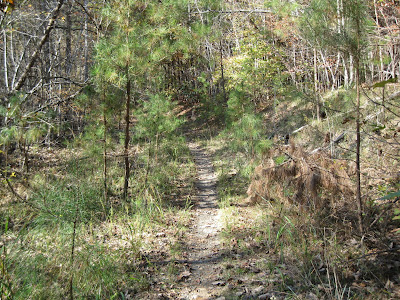 Most of the Supertree trail was superfast downhill. I often reached speeds in excess of 25 miles per hour. It was scary sometimes, but a good kind of scary. There were slippery leaves all over the place, so I figured it would be a given for me to go down. I didn’t. Not even close, really. Goose and I made it through another adventure. I was so happy that I asked the fencepost to take our picture. It was glad to do so. 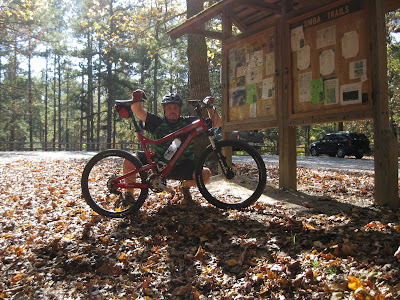 Our “play-date” is over.

After the ride, I paid a visit to my bike shop supporter, Middle Ring Cycles. It was nice to visit with everyone. I picked up a few of their new and improved t-shirts, and I was on my way. I was back to Charlotte in no time, and I got to enjoy a nice beer. Ah, I wish I had this kind of day off more often.
Posted by TheMutt at 7:10 AM