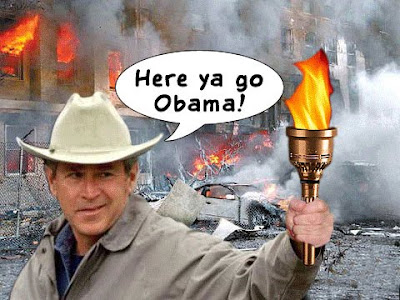 Yesterday was the regularly scheduled Tarheel Trailblazers bi-weekly kids ride. This was my first official kids ride as the new coordinator, since our beloved Gramps left our fine state for sunshine and fishing in Florida. My actual first official kids ride was supposed to be two weeks ago, but that was cancelled due to rain. I had a feeling that it was a bad omen or something, especially since we were in another bad stretch of weather here lately. Luckily for the kids (and me), the rain ended on Friday, and we were scheduled to have nice weather for the weekend. The trails were starting to open on Saturday, so I was hoping that they would be in fine shape for our kids ride at 1:00 p.m. on Sunday. Lunchbox and I loaded up my vehicle with the bikes, and headed out to Sherman Branch. 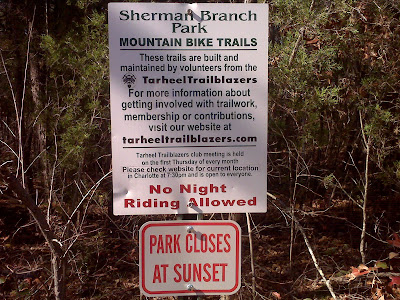 We arrived on the scene at around 12:30 p.m. or so, and there were quite a few mountain bikers in the parking lot. I saw a few people that were present for our kids ride, so I was relieved for a moment. My biggest fear was that no one would show up for the rides after Gramps left for Florida. That would turn out to be not even close to reality.


Everyone met at the trail kiosk for a quick rundown (by me) of the kids ride. I had some of the adults positioned throughout the group for support and assistance. We waited for the last few kids to arrive, and we headed out to the trail. I assigned Lunchbox the task of “ride leader”, a job which he has performed countless times before. He kept a nice pace for the little ones, and made sure that we stopped for all of the trail features, and also at various points on the trail to regroup. 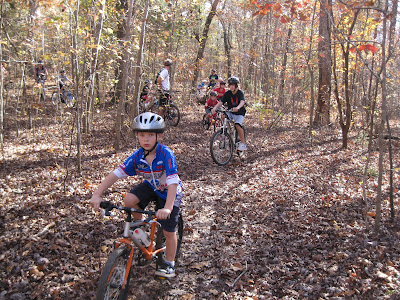 When we stopped at the trail features, we set up on both sides of each obstacle as spotters. The little kids really appreciated this, as they could try each one without fear of getting hurt. This was a good way to build confidence in the little riders, and to hopefully get them addicted to such a great sport and lifestyle. 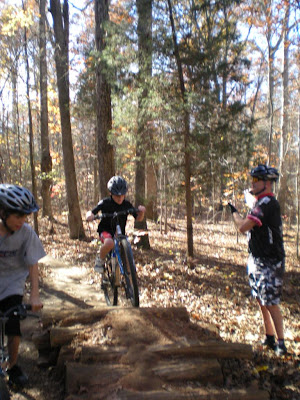 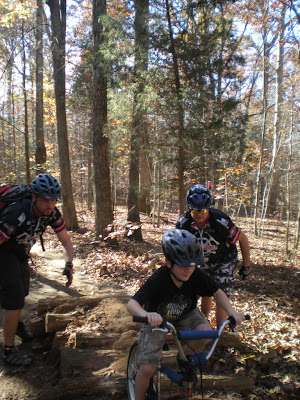 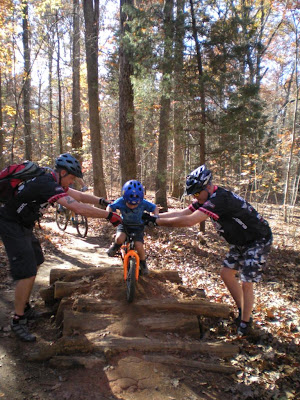 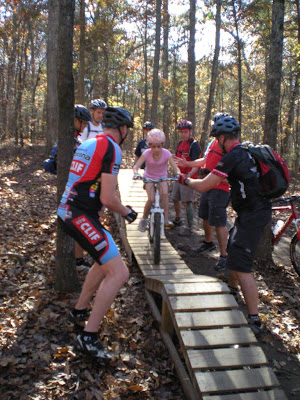 And to think, these kids could be home in front of the TV right now instead of enjoying this beautiful fall day.

We rode along at a good pace between the trail features, continuing to regroup when we came to intersections and such. The kids were having a blast, which helped ease my nerves. I was so concerned that the kids were not having fun, when all I had to do was let them ride their bikes. In fact, the further along the trail we went, the more fun they seemed to be having. I am a little bit of a worry wort sometimes I guess. I just wanted everyone to enjoy themselves. 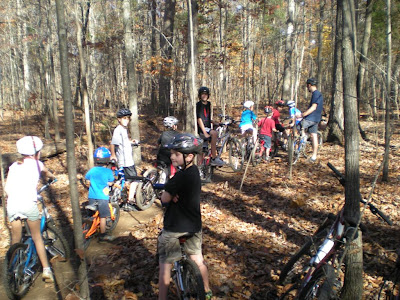 This little guy rocked the trail like a pro on his itty bitty bike.


Even though the kids enjoyed the trail ride, they couldn’t wait to get back to the trail head to enjoy some cookies and Gatorade. I bought everything the night before, and had it ready for the kids when they finished the ride. Down the line, I hope to get a sponsor to help with the small cost of providing refreshments for future rides. Not a big deal though, because it’s worth every penny I spent. The kids were still happy. Good. 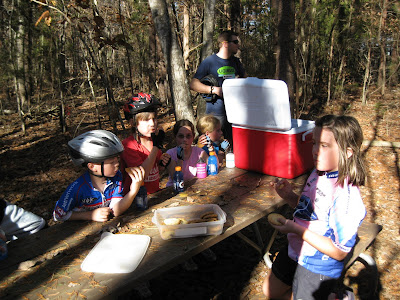 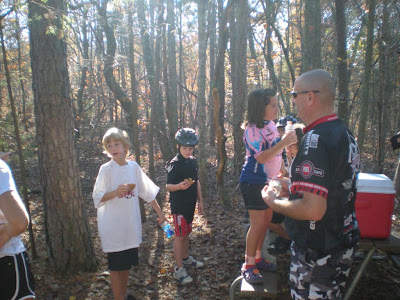 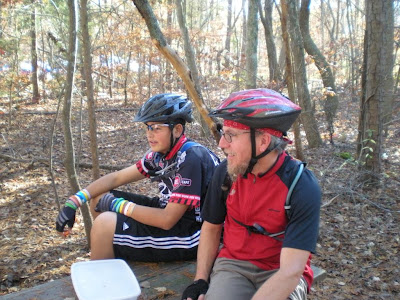 Lunchbox and Doug are contemplating life as mountain bikers I guess.

The kids eventually dispersed, and everyone thanked us for a job well done. I was very relieved, and I thanked each kid and parent for joining us on our ride. I had fun, and it really wasn’t much different than the other rides I’ve done. The only changes were that I had to talk a little more, and provide some treats for the end of the ride. I was very happy that the kids had a great time, because that’s why I wanted to do these rides. It looks like we’ll be doing the kids rides for a long time. By the way, the next one is in two weeks, at Colonel Francis Beatty Park in Matthews, North Carolina. If you’re nearby, come on out.

P.S. Special thanks to Dawn and Lunchbox for taking photos. I ususally take photos, but I was busy being the "ride coordinator." Peace out.
Posted by TheMutt at 10:29 AM