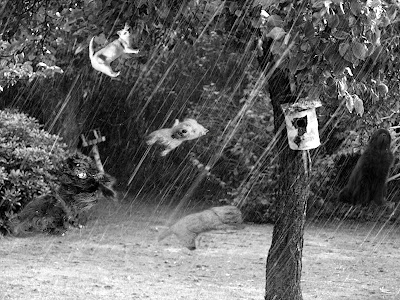 Raining cats and dogs? You betcha!


The past few days it has been raining a lot here in Charlotte and all over the Southeast too apparently. That sure does put a damper on any kind of training I might want to do. Yes, I said training. I’ve been trying to get back into some kind of groove lately, even though my “season” is over. I may run a 5K next month, but I am done until January as far as the mountain bike is concerned. A 5K is such a short distance that I don’t even need to really train for it. It’s just a fun little event that I can say I did. My mountain bike season starts in January though, so I’m trying to get a little bit of a head start.


I’ve been back in the gym again during the week, mostly working on strength training exercises. I also have been riding the stationary bike while I’m there, but that bores me to tears. I’d rather be out on the road or on the trail. That is out of the question this time of year, due to the limited hours of daylight. I don’t get home from work until 6:00 p.m., and it is way too dark to ride my road bike then. Yeah, I could get some lights on it, but that would be like taking my life into my own hands. It’s hard enough to survive on the road in broad daylight. Forget that. As far as the trail goes, I would like to add a weekly night ride to my regimen, but lately the weather has not been cooperating. Maybe next week, I suppose.


So for now, all of my bicycling will have to be done on the weekends (other than the boring-ass stationary bike at the gym.) I think the family and I might do some non-bicycling activities tomorrow, which will be fun. We need to get away for some family time. Sunday looks a bit more promising for the bike though. It is our regularly scheduled day for the Tarheel Trailblazers Kids Ride. The weather looks promising for our ride, so I am looking forward to it. The last ride two weeks ago had to be cancelled due to rain, so we probably have some kids that are itching to ride with us. This time we will be at Sherman Branch, which is my favorite for the kids rides. Maybe I’ll get there early to get a lap in, or we can ride one or two afterwards. I need to get back on the bike more, and this may be my only chance for now. Hopefully the weather will be on my side. If not, I guess I will have to find a way to ride in the rain. 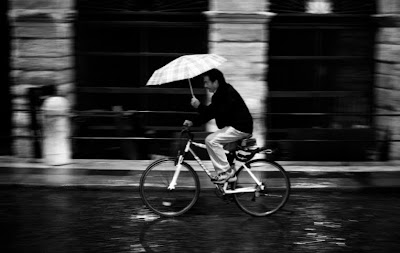 This just might work.
Posted by TheMutt at 6:45 AM