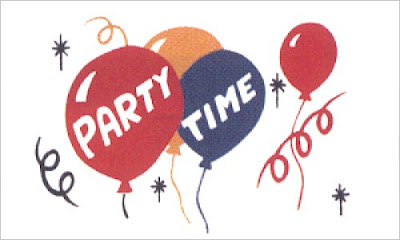 Saturday was the annual Dirt Divas and Tarheel Trailblazers year-end party at Anne Springs Close Greenway in Fort Mill, South Carolina. I woke up early in the morning with Little Miss Sunshine, although this day we would go our separate ways. She headed up to Chapel Hill, NC with her friend to partake in some college football goodness. After she left, I got Lunchbox up out of bed, and we started getting ready for our day. Clark and Goose were loaded up, and then we headed out to South Carolina. 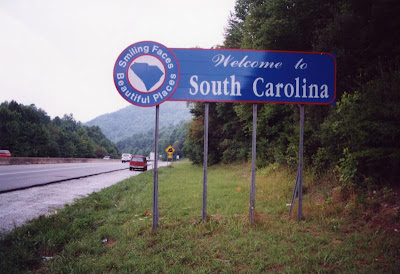 Okay, I cheated. It's only twenty minutes away.

We arrived at Anne Springs on a beautiful, sunny fall day. The parking lot was filling up fast, even though we were a little early. There were several mountain bikers milling about. 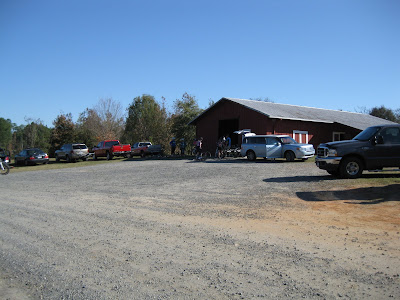 Lunchbox and I changed into our riding gear and headed up to the barn to find out what was on the agenda. The group rides were scheduled to start at 2:00 p.m., followed by the food at 5:00 or so. After a little socializing with some of the regulars, we gathered near the barn to form our groups for the group ride. They divided up into three groups, based upon skill level and riding experience. 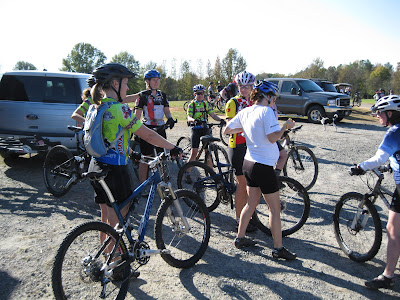 The ladies were discussing the groups. 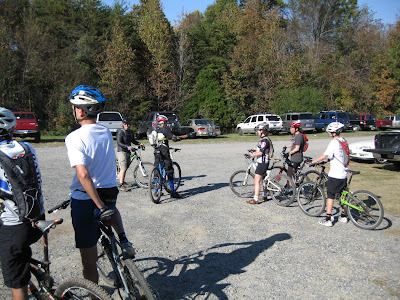 The intermediate group was starting to form.

I ended up in the intermediate group, mostly because I didn’t feel like maintaining a “race pace” during the “party” ride. My race season is pretty much over, and I haven’t begun my training for next season. I figured I would let the “Hot Rod” riders get on it without my company. I wasn’t interested in setting any world record lap times.anyway. Besides, Lunchbox was also riding in the intermediate group, so I would be able to have a little quality bike time with him. I was excited. He is a pleasure to ride with. 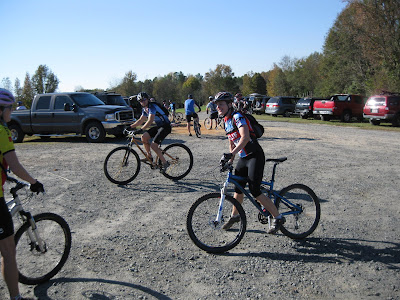 Some people were making their group choices at the last minute.

Our group eventually took off, and we started out at a nice pace. I rode behind Lunchbox for most of the ride, giving him tips and advice. I’m sure he thought I was a pain in the ass. Anywho, we stopped every once in a while to let the group well, regroup, and we made some good progress on the trail. The Divas really did a great job as ride leaders, and gave encouragement whenever they could. At one point, we divided the group up into two subgroups, which ended the together time for Lunchbox and I. My group took one of the harder loops, while the second group took more of a straight shot back to the barn. We blasted through the remaining trail, but we all had to stop when one of our riders got a flat tire. 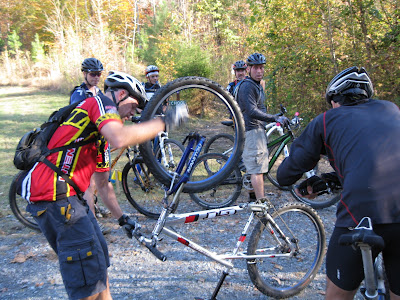 He changed the tire in record time, and we were on our way again. Not thirty feet later though, the same rider decided he wanted to test out the bicycle tolerance of a small babyhead on the trail. Not to anyone’s surprise, the babyhead won. He flew through the air in a glorious fashion, sending his bike floating through the air in a completely different direction. After we realized he was unscathed, we laughed our asses off. He hopped right back on his bike and acted like nothing happened. We couldn’t hide our laughter. My only regret is that I had already put away my camera. Damn.

We were really close to the end at that point, and we very quicly met up with the group that had Lunchbox in it. He informed me that he also had a flat tire, but he was ill equipped to fix said flat tire. Some other trail rider came to his rescue, no charge. I guess I should hook him up with a repair kit for future rides. We finally made it to the fire road that leads to the barn, and after 9 miles, the ride was over. We all had a great time. I think Lunchbox was ready to eat now. 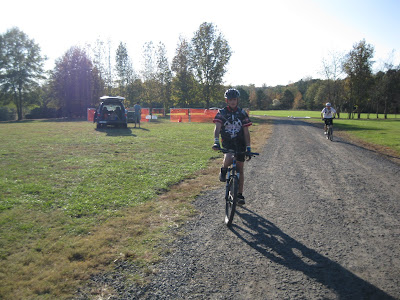 We arrived back at the barn and saw a lot more people than before. There were lots of small kids running to and fro, and they were having fun riding around. What the hell? Who has fun riding somewhere other than a trail? I don’t get it. That’s crazy if you ask me. I guess they aren’t old enough to learn that mountain biking is serious business. So seriously, don’t let your kids ride anywhere but the trail. I’m serious about that too. Seriously. 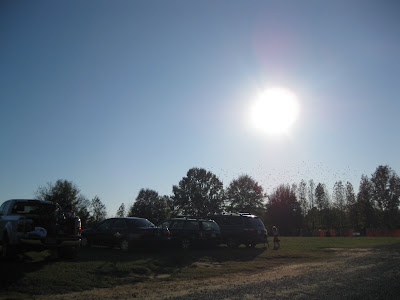 We put away our trusty bicycles, and headed for the barn. There was a table set up at the entrance, and they were selling raffle tickets. I was told that if you don’t win a prize in this raffle, then you are just a loser. Behind the table, there was beer. I bought several raffle tickets and drank several beers. I was a winner already! 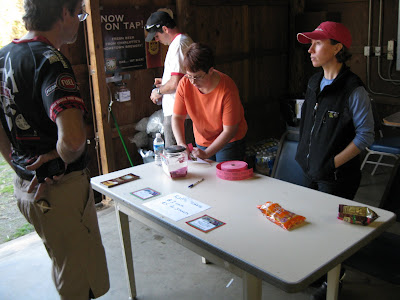 Our club president was deciding how many beers he can drink after he buys some tickets. 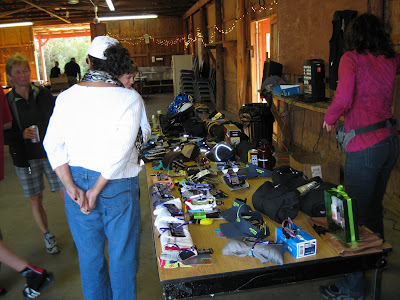 Wow, that’s a lot of prizes.

After settling down in the barn, the food had been set out for our consumption. We moseyed over to the food table and piled lots o’ munchies on our plates. The crowd had increased exponentially by the time we got our food. Luckily we had some cool people save us some seats. 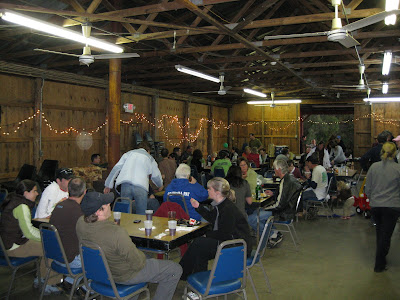 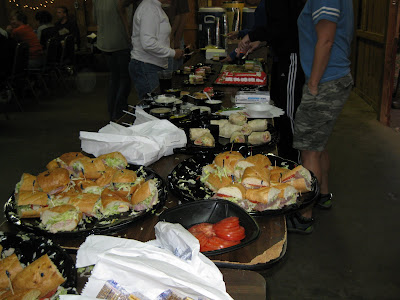 Race promoter extraordinaire Neal Boyd assumed the MC duties, while Lunchbox was by his side (as usual) for the pride awarding ceremony. He withdrew tickets from the jar, and Neal announced the winners. It was a fun time, and we made out pretty well. 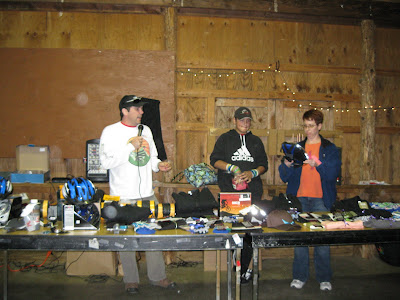 I ended up winning some socks and gloves, which were immediately donated to Little Miss Sunshine. We also won an air pump, which is fitting since Lunchbox needs to learn how to change flats. We also won two helmets and a Kona baseball cap. Wow, I really am a winner!

As the night wound down, people slowly started to head home. Lunchbox and I were in no hurry, since Little Miss Sunshine would be home late from the game. We hung around for a bit to enjoy a nice warm fire on a cold starry night. Good times. 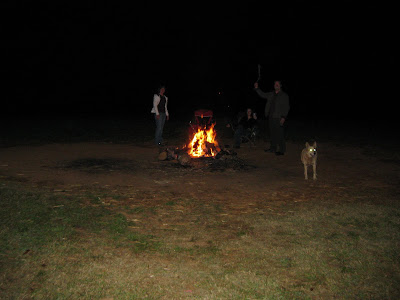 We would live to ride another day. Peace out.
Posted by TheMutt at 7:07 AM