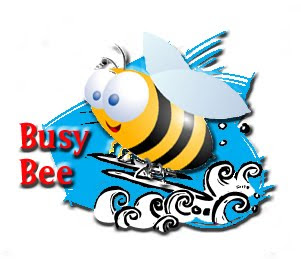 My weekend started a little early, thanks in part to my job giving me a vacation day, and Lunchbox getting a day off of school. I mentioned last week that Lunchbox and I were headed out to the Kerr Scott Trail System in Wilkesboro, North Carolina on Friday morning. We left pretty early in the morning, and headed up Interstate 77 northbound. 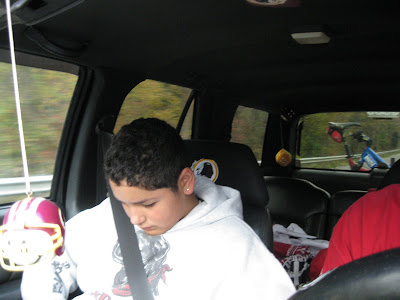 On the road again.

We arrived on the scene at around 10:00 a.m., and had to hit the bathrooms after such a long drive. We changed our clothes, got the bikes ready, and we were ready to hit the Overmountain Victory Trail, one of three trails in the area. It is a six mile out and back trail, and it is full of fast downhills, slow steady climbs, and really fun banked turns. This day was made even better by the beautiful fall colors. The leaves were in full effect. 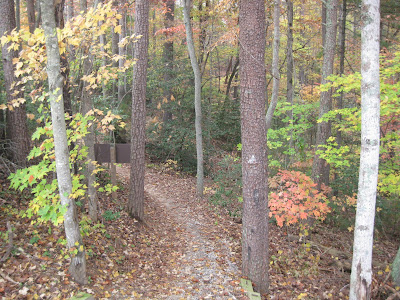 
We tried to start out at a slow pace, but that was nearly impossible after the first few minutes. I led the way at first, and I wanted to make sure that Lunchbox didn’t have too much trouble keeping up with his awesome racing dad. He stuck with me for the most part, but I still made sure we took plenty of breaks. This was a fun day on the bikes, not a race. I wanted him to enjoy the trail, and most of all, enjoy riding in the mountains. How else would I get him to ride more of these mountain trails? 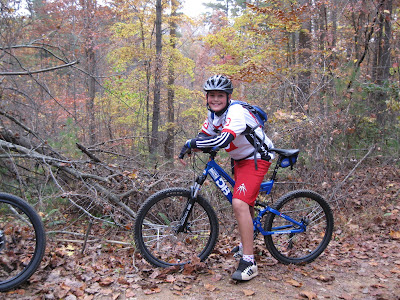 So far so good.

There is a loop off of the main trail called Shiner’s Loop, and it has this really neat jump on it. At the risk of being selfish, I asked Lunchbox to take my picture as I hit the jump. I was hoping that I wouldn’t bust my ass while he took a picture. I’m usually “camera shy”, which means I will crash when there are cameras present. 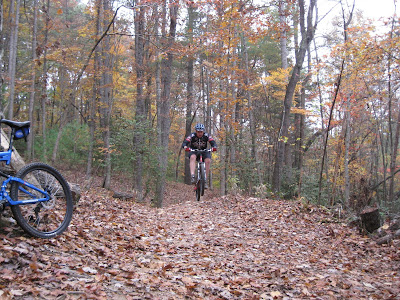 The trail was nothing but fun. The singletrack snaked around all of these pretty views, and it was it prime condition. We circled a lake, and we also saw some steep drop offs. Lunchbox enjoyed all of the fast downhills and banked turns. He took everything like a pro. 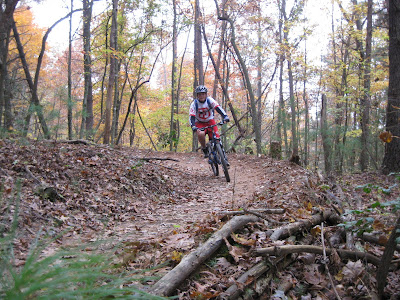 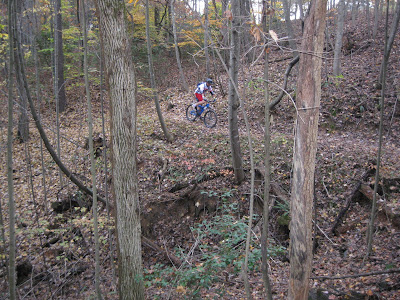 Lunchbox played cameraman again and got me riding some downhill bank action. Little did he know that I am too fast for film. If it wasn’t for his cat-like reflexes, he wouldn’t have captured my photograph at all. 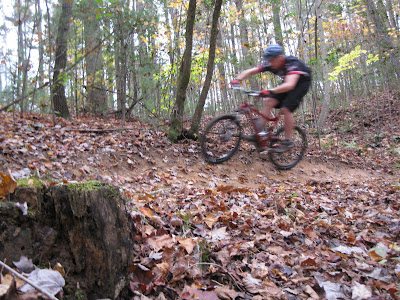 We hit the halfway point after six miles, and sat for a little bit at a picnic table. We ingested some carbs, checked our equipment and headed out again. On that side of the trail, we saw several small deer, and even some really fat squirrels. It was nice to see nature’s creatures in well, nature. Beautiful fall day, excellent views, and a few critters were the highlights of our day. We took the trail back to the beginning a little faster this time, and it was even more fun. I recalled one crazy drop-in I saw on the way out that I knew I wanted to hit when I came back. Lunchbox positioned himself with the camera, and off I went. It took a few tries to get a good shot, and I still didn’t have a horrific crash. Lunchbox said it would have been cool to film me crashing. He is such a funny kid. 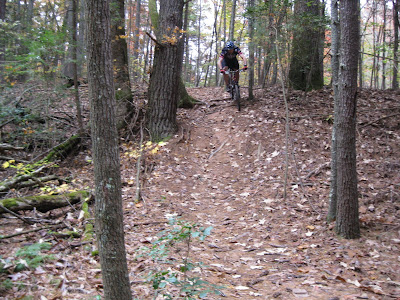 In all, it was a great day. We left the trail and headed out for some lunch to stuff our faces and talk about our great riding experience. We got back on the road headed for home, but we quickly made a detour. Remember when I said that there was an Amish Paradise in North Carolina? Well, Lunchbox insisted that we stop there for a visit. We made a trip to Shiloh General Store in Hamptonville, NC. 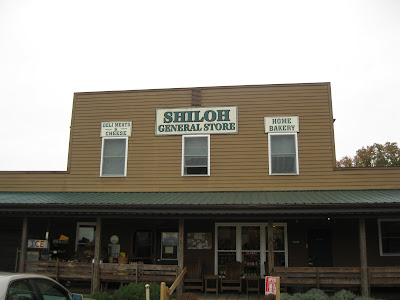 No, there is no website link. Amish people don’t have computers, do they? Well, it wouldn’t surprise me if these ones did. While at the store, we heard the telephone ringing, all while we were standing in an air-conditioned room with tons of electrical amenities. Amish Lies, is what Lunchbox calls this store. I even witnessed a young Amish lady taking out the trash. 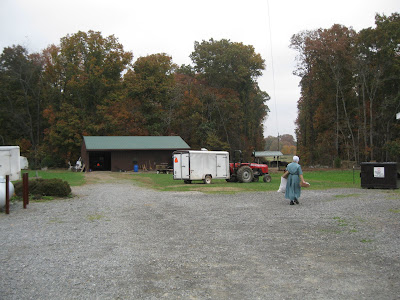 They are still traditional Amish people I guess, with their values and stuff. These particular people just liked a little comfort I suppose. As far as I know, they are hard-working people, and they make a nice living working the land and such. Why, just look at this ad I saw on the bulletin board. 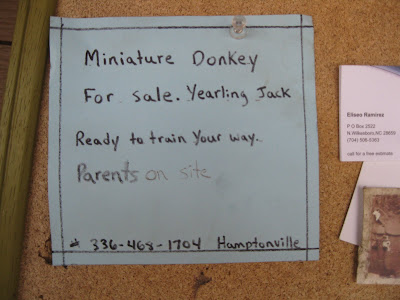 Train your way? I wonder what that’s all about.

What an interesting day. We started out the day as gnarly mountain bikers, and ended up in Amish country. Who the hell does all of these things in one day? Welcome to the world of B-43. I told you we were weird. One day you will get it. By then, we will have gotten worse. Tune in tomorrow for more weird junk, if you dare.
Posted by TheMutt at 6:42 AM