Saddle Up! We’re Goin’ to the Big Stampede! 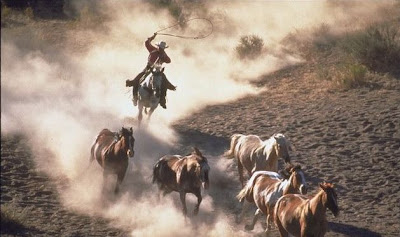 I do believe I told y’all that the The Big Stampede Southeast Bike Expo & Swap was coming to town this past weekend. Unfortunately we weren’t headed to the O.K. Corral for some horse wranglin’ and whisky drinkin’. The plan was to drive on over (no covered wagons either) to Lowe's Motor Speedway in Concord, NC, just a few miles from my house in Northeast Charlotte. I woke up Sunday morning, and got ready to head out the door. Not before eating a quick breakfast though. 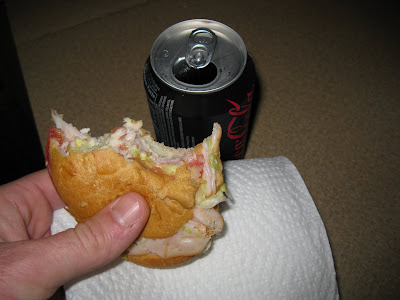 Mmmmmm. Now that’s what a super-awesome mountain bike racer has for breakfast.

Yep, I had some leftovers from Saturday’s Dirt Divas and Tarheel Trailblazers year-end party. Lunchbox hooked us up by bringing home a ton of sandwiches to enjoy later. It’s like having a party that lasts all week! If only I could have brought home some of that beer though. Well, Actually I did bring some home, but I peed it out. There, are you happy? As I got ready to head out the door, Little Miss Sunshine was preparing her own (probably much better) breakfast. I stood there for a moment and contemplated staying home to enjoy some good ol’ home cookin’. 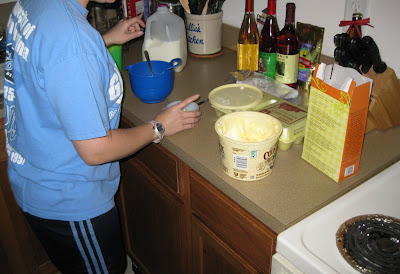 Hopefully she’s grabbing the milk instead of the wine.

While the temptation of Pumpkin Pancakes almost kept me home, I decided it should get out for some bike part shopping. I am the designated parts acquisition technician for the B-43 household, so Little Miss Sunshine had no intention of attending this fine event. That meant that she had no say in what I bought for her, but it also meant that I had no restrictions on what I could buy for me. I grabbed a huge wad of cash, Mr. Lunchbox, and headed out to the speedway. 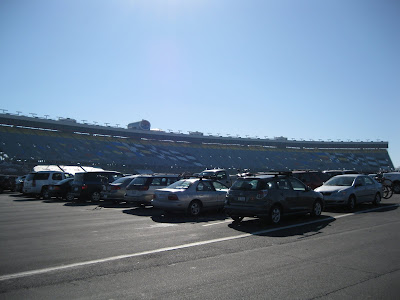 We drove to the infield of the speedway, which I imagine is the Holy Land for NASCAR types. We were ill equipped for race spectating, since I forgot my cooler full of crappy beer, lawn chairs, and oh yeah, I didn’t drive the RV. I guess we would just have to settle for the bicycle-part flea market. We arrived at the gate, and there was a guy charging admission to the event. Admission? I have to pay five bucks for the pleasure of shopping for used bike parts? Sweet. And, in addition to money, we had to sign a form in case we wanted to sue them. I guess it’s very dangerous on a NASCAR track when it’s full of cyclists peddling their wares. Wait, cyclists pedaling where? 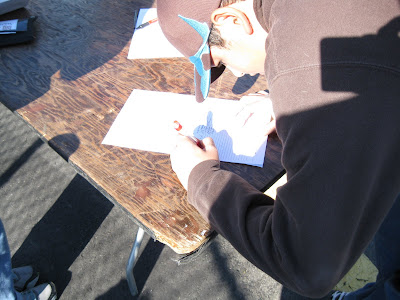 Lunchbox signs his life away.

We headed over to the garage area, which was full of tables set up buffet-style for my parts buying pleasure. We initially gazed over the selection one booth at a time, but we didn’t really look in detail. We would take a closer look later. I just had to take it all in. 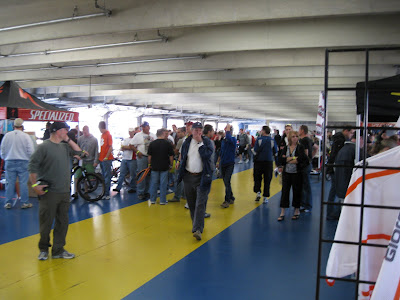 After our first pass through, I got a call from the Dirty Party Cycle. He was on site and ready to tear this place up looking for deals. Now we had a three man team, and we could find the best deals more effectively. There were so many unique things to buy; I didn’t know where to start. Maybe I needed a new bike. 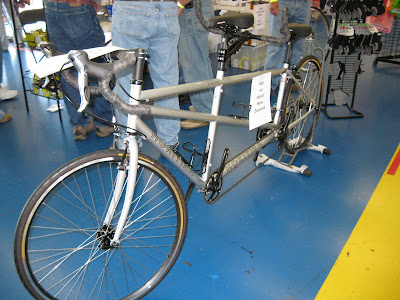 Ummm, I didn’t ask about New Zealand. I was very afraid.

There were trinkets galore, but nothing really stood out. That’s not entirely true I guess, since the crazy bikes they had on display were standing out quite well. I was amazed at the selection of not-so-normal bicycles. 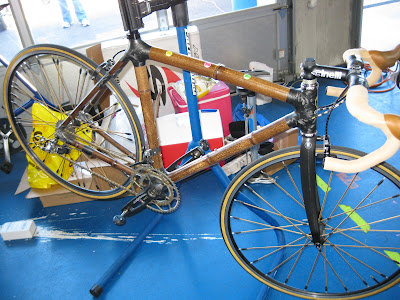 You’ll have to keep away from the Pandas when you’re on this one. 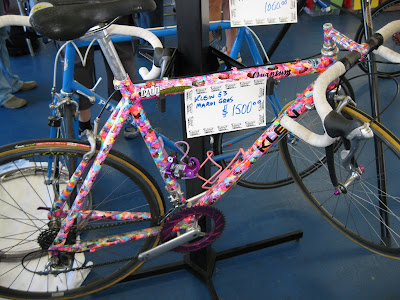 This is the Technicolor vomit bike. I was sick just looking at it.


I managed to find a few deals here and there. I found a water bottle cage for Tigger, Little Miss Sunshine’s trusty KHS. The guy gave it to us since he didn’t have change for a twenty. Sweet! I also found some riding glasses with interchangeable lenses for Lunchbox, along with some socks for his gigantic feet. My best find was a set of Crank Brothers Candy pedals for the low low price of $30. I didn’t really need them, but I figured, “What the hell?” The DPC got a few deals as well, including some really nice gloves for a steal of a deal. We were all satisfied with our treasure. We took one last look around to see if we had missed anything. 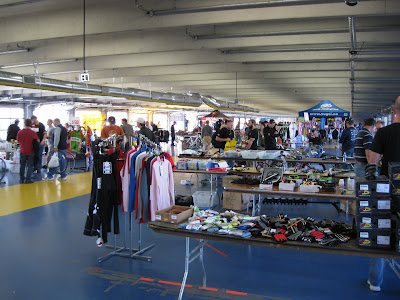 Nope, we’re good. I think we had all the wheeling and dealing that we could stand. That’s a good thing, since we had a surprise waiting for us outside. We heard the roar of engines, and saw that there was some track driving action happening. I don’t think it was full on redneck NASCAR action, but the cars looked the same to me. 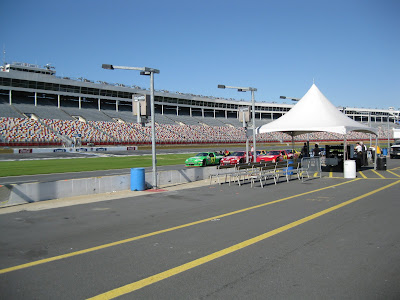 They were taking practice laps or something. I have to admit, it was kinda neat to watch them drive around for a few laps. Secretly though, I was hoping for a crash. Maybe that’s why we had to sign a waiver. Hmmm. No crashes, but I got a few more photos. 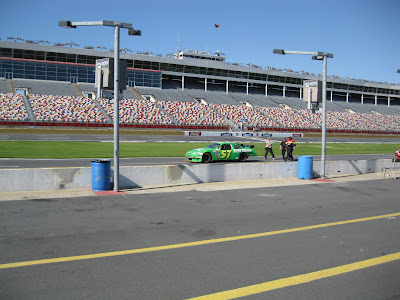 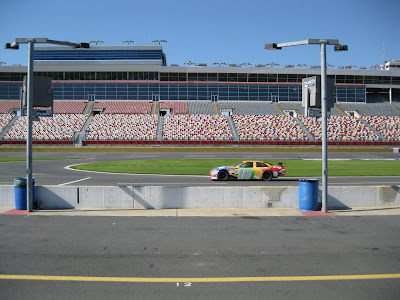 What a nice day for shopping. I didn’t really need anything, but where’s the fun in shopping when you need stuff? I found a few deals, as did my associates. There was something for everyone. We saw mountain bikers, roadies, tandem lovers, comfort bike people, and a wild assortment of others. Hell, even the girl-jean wearing bike messenger crowd was represented. 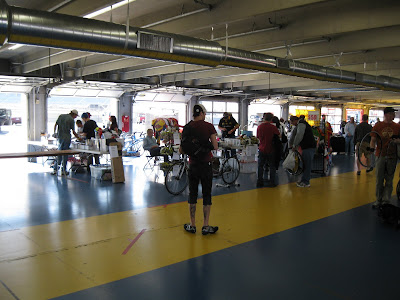 Please shoot me if I ever look like that.

I guess I will have to wait until next year for this kind of fun. That’s a bummer, because I could do this every weekend. I guess I’ll stick to perusing the old parts bins at my local shops for some bargains. The good thing about the Stampede is that I don’t feel so icky when I’m digging through stuff. Maybe the “flea market” thing felt so natural because I was at a NASCAR track. All I needed was some Busch beer. Yuck.
Posted by TheMutt at 5:55 AM