I mentioned that the 2012 Winter Short Track Series was just “training” for me, right? Well, what better way to train than to go all out for one race, then do it all over again later. That’s exactly what I did, and now I’m feeling the pain. Let’s start with the first race.


I wasn’t as nervous as I usually am before a race, but I still had the pre-race jitters. I didn’t plan to shock the world with my awesome mountain biking ability in the first race of the season, but I still wanted to do well. We lined up at the start, and I felt great. I had plenty of food in my belly from breakfast, and the temps had warmed up a bit before my group went off. When we were given the signal, I took off with the pack.


I didn’t plan to haul ass and fight for position, but somehow I ended up going into the woods in second place. I was right on the wheel of the guy in first place, and I nearly ran him over because I was way faster on the downhill stuff. I had no issues whatsoever, and I even felt like I could win it all. 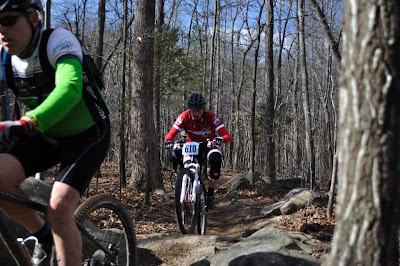 Well, when we hit the climb out, I slipped a little and came unclipped from my pedals. A few guys went buy me, but I hurried back on the bike and got going again. It sucked to suddenly stop like that, and it took me a few minutes to recover. I started falling back, but I decided to settle in and grind it out. Maybe I could catch the leader again.


I don’t remember much about each individual lap, but I do remember a crowd of hecklers (led by Dicky) hanging around the new and improved jump. I did my best to hit the line the way such lines are supposed to be hit. 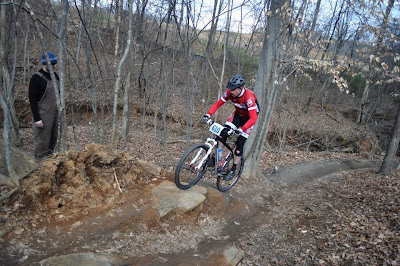 As the race went on, I started to get tired. Two months of barely training had taken its toll on me I guess. Local Clydesdale racer Rodney B. passed me on a climb, and left me in the dust. We usually keep about the same pace, but this time I couldn’t hang on. I let him go.


That didn’t stop me from having fun though. 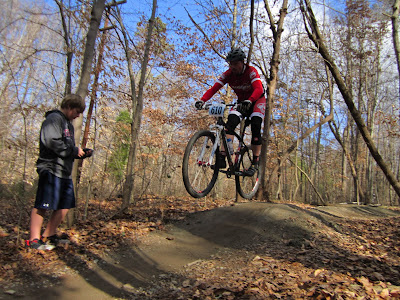 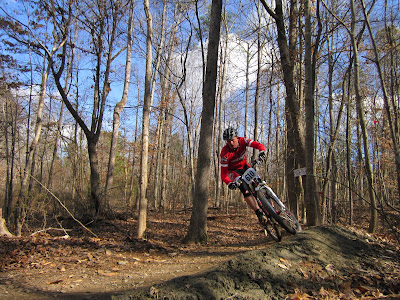 
When I got into the downhill section, my super awesome skills let me get close enough to get him in my sights again. Coupled with the fact that I had just lapped some riders in the class that left before us, I started feeling good again. I turned it up and Rodney and I proceeded to battle on the way to the finish line. 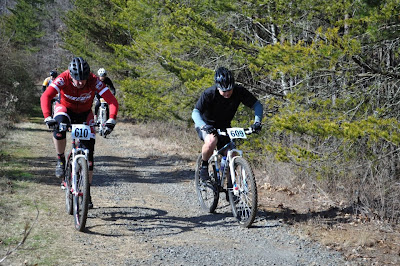 I gave it all I had, and passed him on the way to the finish. I was shocked when I saw the results. 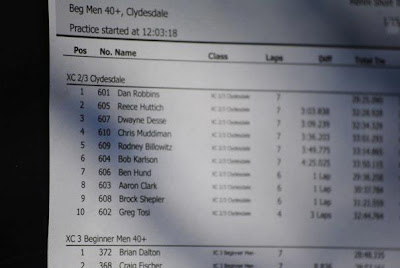 I was beat ass tired, and started to have second thoughts about doing a second race out there. With about an hour and a half of rest though, I made myself sign up for the single speed race. I figured that it wouldn’t be too bad, but I had no idea what I was getting myself into.


I’ll cut it off here and save the sufferfest for tomorrow. You have been warned.
Posted by TheMutt at 8:41 AM