Last night, we had an impromptu trail work day at RTS (formerly known as “The Trail” only days ago.)  We recently acquired some new features via donation. 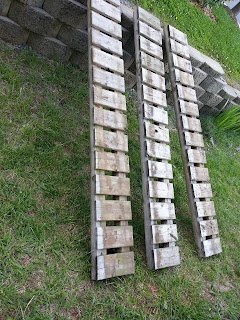 Since I didn’t want these sitting on the side of my house too long, so Good Guy Greg came over and we met TomTom at the trail to get these out there.  We have an idea for a good use of these skinny little bridges, but we didn’t really have time to get them installed.  Lugging those heavy ass structures out in the woods took a little longer than we thought, but we’ll be back out there soon to put them where they belong.  It’s spring, you know, which means longer daylight hours so we can get shit done.

It also means that we’re gonna start seeing more critters out and about. 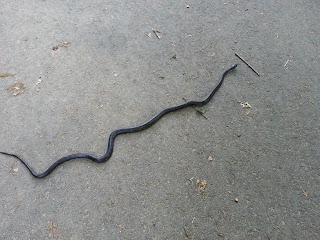 Springtime has brought new life to the trail, and it has a whole different feel now.  With all the leaves and new growth, it makes it seem like you’re in a more remote location, rather than in the middle of one of the busiest areas in . 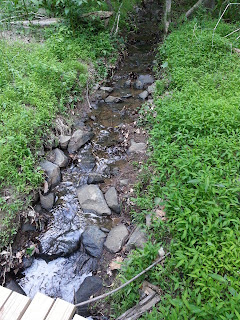 That’s the creek we re-routed back in the winter, and it’s doing quite well, thank you.

Man, it’s so nice out there now.

In other news, I have lots and lots of two-wheeled action planned for this weekend, starting tonight.  As soon as I can get outta work (early I hope) I’m heading down to The Spoke Easy for their Bike Charlotte Party.  I’m not sure what’s going on down there, but it’s all good because there will be beer.

That’s pretty much all I need to party.

Saturday will be a first for me.  Instead of heading out to a local trail, I’ll be riding in the Big Bingo Ride.  I’m not sure what to expect there either, other than the fact that I’ll be riding my bike all over town at a leisurely pace.  And yeah, there will be beer there too.

I guess that sounds like a full weekend and all, but if the weather cooperates then I’ll get out on my bike somewhere in the woods on Sunday.  I’m sure I’ll be having dirt withdrawal by then, so the rain better stay the hell away.

And now, I’m gonna get outta here.  I told you, Fridays are slow, and most of you have a short attention span on the last day of the week.