But a bad ride wasn’t one of them.

On Saturday, our trip to FATS near was on.   D-Wayne rolled down to the B-43 Worldwide Headquarters bright and early, joining myself and Lunchbox to meet the rest of the crew down in Rock Hill, SC.  We rolled up on the scene and found Dennis, Good Guy Greg, TomTom, and Eastwood waiting at a local McDonald’s.

We hit the road, making the little over two hour trip seem like nothing.  When we got to the parking lot, we met up with Dustin from Southern Wheelworks for a nice day in the woods.  We got ready, and hit the trail at a social pace.  When we got to the first intersection we took the Great Wall loop and hauled ass.  It was fun as hell, until I realized that we were missing someone from the group.  I pulled over to the side of the trail with the rest of the group rolling up right behind me.

No one knew.  I figured that maybe he missed a turn (it’s easy to do even though he’s been there a bunch) so I told the group to continue and I would go back to look for him.  I sprinted up the long climb (which we had just rolled down) and headed back to the parking lot, backtracking as best I could to find him.  When I turned around and headed into the loop backwards, I found Lunchbox on the side of the trail with a flat tire.

He was in the process of changing it, so I helped him along.  He hadn’t even gone half a mile when he pinch flatted.  I really gotta set aside some time to get that boy setup tubeless.  Anyway, I asked if he wanted to ride the loop the “fun” way or if we should just keep going backwards until we eventually ran into the group.  He opted for the former, and without a proper warm up we hauled ass to catch up.  I was hoping we would find them well before they finished (and went on to the next loop), but we were wearing ourselves out trying to catch them.

Just as we thought all hope was lost, we rolled up on a group of riders that looked strangely familiar…and had a problem that was also familiar. 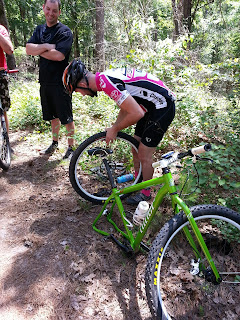 Yeah, it turns out that Eastwood flatted too and they had been there for a while.  His inferior tire sealant didn’t do the trick when he punctured the tires, and multiple bad tubes, co2, and unsuccessful hand pumping couldn’t get things right.

He worked his ass off trying to get back to riding.

Eventually he got it, but the tube didn’t hold air.  We had to stop several times so he could top it off (without all that weird pumping action this time), and we all decided that a trip back to the parking lot was in order.  Dustin (the guy who built those wheels) was kind enough to provide some real tire sealant and we got busy trying to get the tire to air up without a tube. 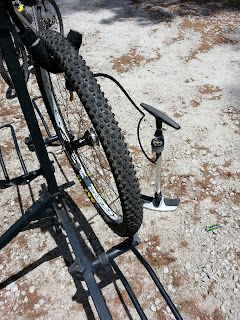 And the smart people just sat back and watched. 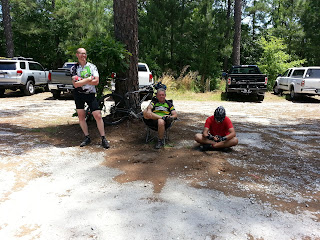 We eventually got things right again (by using a co2 instead of the pump), and went on to have an awesome ride.  Fast, flowy, smooth singletrack, and hauling ass in the woods with some good people for hours was just what I needed.

Well, that and a beer. 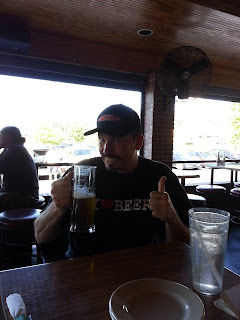 And of course Lunchbox needed a ton of food. 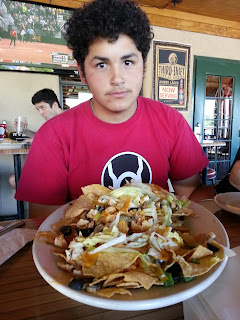 And since I’m apparently trying to keep the streak alive by talking about you know who very single day, here’s a photo of some socks we spotted on the ride. 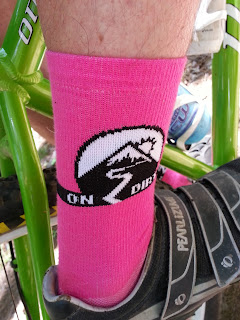