After getting to bed so late Friday night/Saturday morning, I was up early again.  I met up with the Dirt Divas to help with a skills clinic, which had me taking a few laps on one of our local trails.  Good Guy Greg was there helping/suffering along with me so that made it a little better.

After the skills clinic was over, we decided to head up to The Cycle Path, where Mark was hosting a swap meet.  I didn’t really see anything that I had to have, but that might be because this homemade sign made it look like he was giving away free penises. 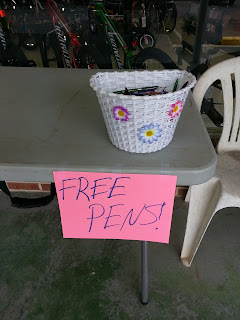 As the swap meet started to wind down, we decided to hold a bike giveaway… 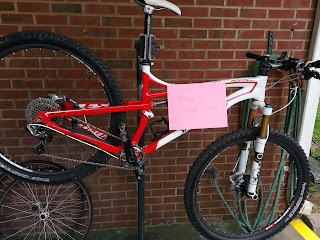 Kinda hard to see in the photo, but the sign says, “Free to good home.”  Mark wasn’t pleased, and I wasn’t pleased that it sat there untouched.  I guess no one wants a Special Ed these days. Not even a free one.

As if that wasn’t enough to do while being hungover, I hurried back home, cleaned myself up, grabbed Lunchbox and headed down to Fort Mill, SC for a crawfish boil.  While it wasn’t a biking event, we did go for that reason…sort of.  We ran into our good friend Shane, the Chief Sockologist at DeFeet International and front man/bass player for the band CroMoly.  After getting a photo the day before with the mayor of , Lunchbox was all about getting another photo op with a different celebrity. 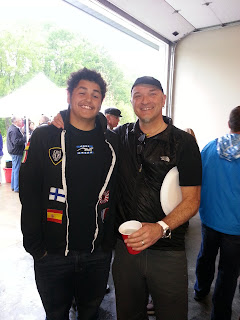 We chatted for a little while, until he had to take off to get ready to play.  I took that opportunity to ease my hangover by enjoying some beer. 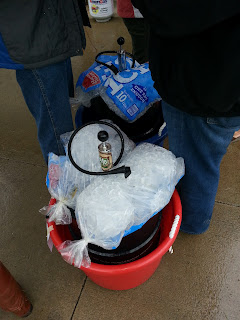 After the warm-up act finished (I don’t remember their name but they were pretty good), my new favorite band took the stage.  They never disappoint. 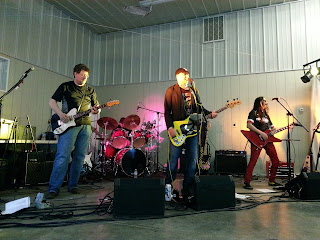 They rocked it for a while…until the fire alarm started going off.  I know they’re good and all, but I didn’t realize that they would try to burn the house down with their music.  I’m not kidding, because a little bit later the fire department showed up to see what the hell was going on. 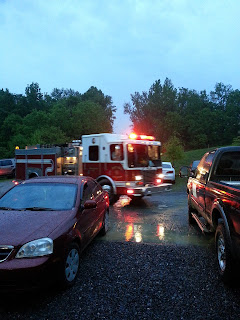 After we were given the all clear, they took the stage again and finished the show.  We had a blast, and it was good to see them play again.  That was the first time Lunchbox got to see them play, and he’s a big fan now.  We hung around a little bit after the show with the band, then I had to get my ass home to get ready for the big race the next morning.

No wonder I’m so damn tired.

That whirlwind weekend was worth it though, and I don’t regret it one bit.  Anytime I get to ride my bike, drink beer, and listen to one of my favorite bands play is a good thing.  I just can’t do this kinda shit all the time.  Luckily I don’t always cram so much stuff into a weekend.

Well, most of the time I don’t.