I forgot to mention that we went on a group ride Tuesday night.  It was fun, but I didn’t really take any photos.  Well, except this blurry one of Good Guy Greg. 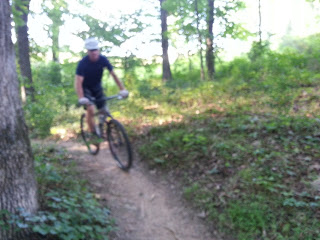 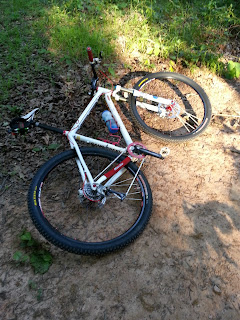 Anyway, with some kind of sickness catching up to me after our trip to FATS last Saturday, I decided to take it easy on Sunday.  I had originally planned to ride every day of my three day weekend, but honestly I didn’t feel like doing a damn thing.  After sleeping in a little bit I forced my way outside to the garage to work on bikes.  Well, one in particular anyway.

My single speed had a few issues from some shitty weather riding so I had to address them.  I cleaned out the bottom bracket and headset, replaced the chain, and put more sealant in my tires.  And that’s when it hit me…

I probably should change some shit that doesn’t need changing.

I love things to stay the same for the most part, but every once in a while I like to switch it up for no apparent reason.  In this case I took off my 32 tooth chainring and replaced it with a 34. 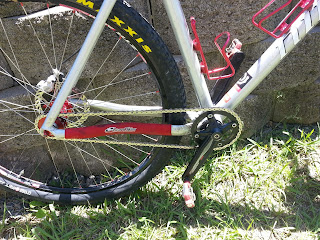 And the very next day I was feeling a little better and took it for a ride. 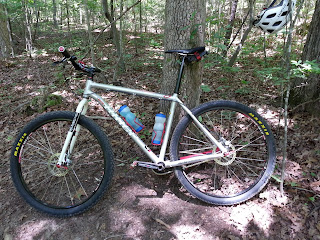 Running a 34X18 locally isn’t really a big deal I guess.  I liked it from what I could tell, but I was pretty tired from being sick so I couldn’t really make an honest assessment.  I felt like it was tougher to accelerate out of corners, but I had plenty of speed rolling down the trail.  I didn’t really have any problems climbing, and actually I felt like I had more power.  I’ll keep in on there for a while to see if I like it I guess.  You can’t tell a damn thing after one ride, you know.  A few more rides and I’ll make a decision.

So, back to the geared bike and why the hell I was riding it.  I like it.  Not the gears, but the actual bike.  With pretty much the same frame and exact components as my SS(other than the shifty bits and squishy fjork) it rides just the same.  After getting used to a little squish up front I enjoyed it, and I realized that I wouldn’t mind having suspension once in a while as long as I don’t have to swap out a fork.

As for the gears, I couldn’t really get used to them after spending so much time on a single speed.  I know, I’m probably way too far gone to the Dark Side now to turn back.  I don’t want to believe that though, so that’s why I’m giving my gears one last chance.

For the next five rides (on trails), I will only ride my geared bike.  I will miss the simplicity of my single speed for sure, but I figured that five rides will be enough to decide whether or not I wanna keep them.  After all, that’s all it took for me to be convinced that I should be on a 29er full time.  If I like the gears (and can get used to shifting them), I will keep it and alternate between the two (depending on ride plans of course.)

If there’s no way in hell I can stand the gears, then they go the hell away.  As in, I’ll take the shifty shit off and convert it to a single speed.  Why two single speeds?  I dunno.  Maybe so I can be lazy and not have to swap out forks when I go to the mountains.