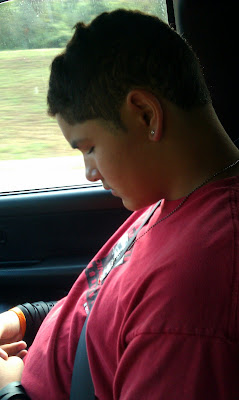 Lunchbox slept the whole way on our trip to Wilkesboro for the Southern Classic Series finale at Dark Mountain. That’s exactly what I wanted to do. Somehow though, we drug our asses out of bed and hit the road, even though I didn’t even feel like racing. My knee hurt, my stomach was upset, and I didn’t think that there was a chance in hell that I could place high enough to score some decent points for the overall standings. My mind wasn’t in it at all.


I discovered that I was in 3rd place overall and only 11 points out of second. I would have to score 4th or higher to make up that gap. At that point I just relegated myself to a 3rd place finish in the series. My goal was a top ten overall, and I had exceeded it. Damn it, I was giving up before the race. I even planned to take off very slowly when the race started.


That didn’t happen though. When we were given the signal, I took off quick. I got up to second, and tried to settle in as we hit the trail. Once we got on the first climb though, I started hurting. Legs, lungs, stomach…I was falling back fast. I let one guy go, then another. My buddy David was right behind me, and he rode with me for a bit. He seemed to be happy riding at my slow-ass pace…for a little while anyway. After a fast downhill, we came up on another climb. I told David I was getting slower, and that he should go on by. He resisted at first, but when he realized that I wasn’t kidding he took off. I had settled into 5th place, and I was okay with that.


I just pushed along, not even giving a shit if I caught anyone. Eventually I recovered, and started feeling much better. My stomach pain went away, and my legs started feeling pretty good. I saw a rider up ahead, and that motivated me to pick up the pace a little bit. Once I got closer I realized that it was someone in a different class. I stopped trying so hard after that.


Why the hell was I even out there? I could have sat on my ass and still ended up in 3rd overall. There wasn’t a damn thing wrong with that, right? I wouldn’t dare quit unless something broke and left my bike in a non-working state, but I saw no reason to “race.” That all changed about three miles in, when I spotted 4th place up ahead. It was David, and he was tired.


All of a sudden I started pushing. I asked if he was okay, and he said he was just a little tired. I had a sudden burst of energy and I passed him. He stuck with me for a long time, and I thought he had recovered. We came up to a long downhill section, and I let it go. I was trying to build a little gap before the next climb, but I couldn’t. I’m pretty fast on steep technical sections, but somehow I couldn’t get away. We finished the downhill and started climbing again, and somehow I still felt great. I pushed as hard as I could, and I zipped my ass right up the hill. I kept looking back, and he kept falling back. After a little while I didn’t see him anymore. Now, it was a race again.


One last downhill section, and I was looking forward to it. The plan? Pretty much go as fast as I can without crashing to put a big gap between me and David. I went a little too fast out there though, because I actually scared myself a little bit. It was okay though, because I was in total control. David told me (back when I passed him) that third place wasn’t far ahead. I started to wonder if I could really do it. Just then, I saw my pal D-Wayne on the side of the trail.


He wasn’t there to give me this beer, either. 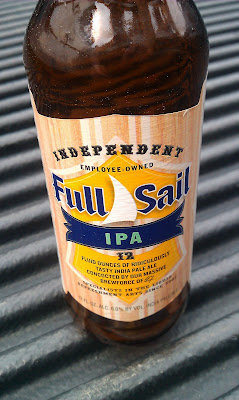 Okay, he did give me that beer, but it was after the race. It was good too.


Where was I? Oh yeah, dragging out yet another race report. I’ll go ahead and cut it off here to save you the agony. We’ll meet back here tomorrow for the conclusion, okay? See y’all then.