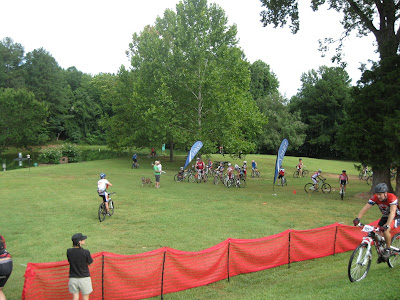 But for some reason I felt like I shouldn’t have been. I’m talking about the race report from last Sunday’s Sizzler in Greensboro, by the way. Since I’ve slept a few days since then, it may be a little difficult to remember the details. Here goes.


Sunday morning, the Dirty Party Cycle met us at the B-43 Worldwide Headquarters, and we headed north. It had rained all night, so I was kind of regretting my decision to race. The fact that it was an unfamiliar trail made it worse. We got there, and I found out that it had rained there, but that the trail was in pretty good shape. Well, except for the bridges. Those were super slick. Everyone I talked to warned me about how dangerous they were when wed and covered with mud, and I took note of it. I didn’t need to worry about that though, because I later found out that it would be out of my control.


After warming up, I was ready to go. My class had a pretty good turnout, which meant a lot of points for me if I could place well enough. I didn’t have high expectations though. I can afford to drop a few races and remain high in the standings, so I approached this race with caution. I would take it easy on the climb at the start, then try to pick off the other riders over the eighteen mile course. We took off. 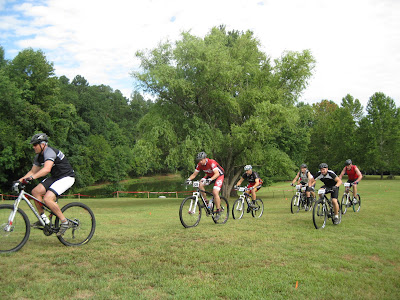 I started riding at what I thought was a slower pace, but I started passing people. I decided to push it a little more, and I got all the way up to second place before we reached the top of the hill. Before I could pass the last guy though, I started hearing a funny noise coming from my drivetrain. My bike felt weird too, so I slowed down to see if I could spot anything while I was riding. When I did that, most of the pack went by me. I didn’t care though, because I knew I could catch back up if my bike was okay.


I didn’t see anything obvious, so I kept going. I pushed a little harder, and got right back into the pack. As we hit the singletrack, I mashed up a short but steep climb. The funny noise I was hearing was a little louder now, but I didn’t care. I said to myself at that point though, “I can’t remember the last time I replaced my chain.” Those words would bit me in the ass moments later.


After a little singletrack, I saw the bridges up ahead. I adjusted my speed before hitting the little downhill section right before them, and cleared the first one just fine. In between, I mashed a little to gain some extra speed to make an upcoming climb, and I heard a loud pop. My chain had broken, and it caused my rear wheel to lock up…right on the slippery bridge. I was violently thrown from my bike into the ditch, and got whacked in the tailbone by the nose of my seat. That shit hurt. At least it only broke two links from the quick link though. 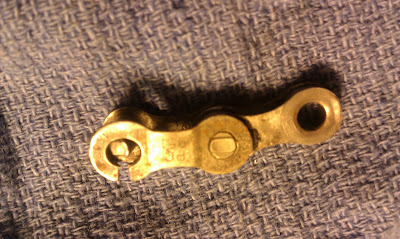 I ran my bike up the hill, and tried to repair the chain. Since I had plenty of chain left, I knew I could fix it and get back in the race. The only problem was that I couldn’t find half of the quick link. I ran back down the hill and dug around on the side of the trail. After what seemed like forever, I found it. I ran back up the hill, put my chain back on, and I was on my way. My group was long gone, but I felt good enough to try to catch them. With three laps of racing, I had plenty of time. My problems weren’t finished though, because I started hearing that noise again. Shit.


After a few short climbs (which had me stressing the shit outta my repaired chain), The sound was getting worse. I stopped to take a look, and found that my chain was ready to break again, but in a different spot. 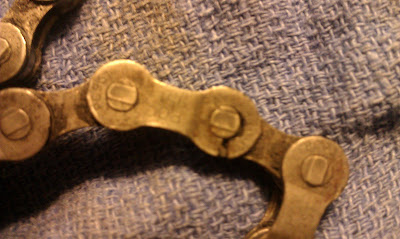 Without a spare quick link, I wouldn’t be able to fix that one. It was in the middle of the chain, and if it broke I would have to walk the rest of the race just to get out. That didn’t sound very appealing to me. However, I paid money to ride, I mean race out there, so I at least wanted to get one lap in. With the pack too far out of reach and pretty much a guaranteed DNF, I decided to ride slowly and carefully. At least I could enjoy myself out there, I thought.


I wasn’t mad about my situation at all. In fact, I enjoyed my ride. The trail was fun, and it was surprisingly dry (well, except for the bridges.) If I had a fully functioning bike, I probably would have finished the race in a respectable position. Since I was just out “joyriding”, I pulled over for other racers that came up behind me. I walked some of the longer climbs to make my chain last a little longer, and hauled as on the downhills (you know, because you don’t really need a chain for that stuff.) I even stopped to have a conversation with a local Bike Patroller. I was having fun in the middle of a race, without actually racing. I don’t want to do that all the time, but it was nice.


Eventually, I made it to the finish line. After only one lap (which took an hour), I called it quits. I hated to do that, but at least I didn’t break my chain again. If I would’ve had to walk a few miles to get of of there, I probably wouldn’t have been too happy about it. I wasn’t happy that I DNF’d though, but at least I didn’t have to walk out. Lunchbox did a good job of catching my disappointment with this photo: 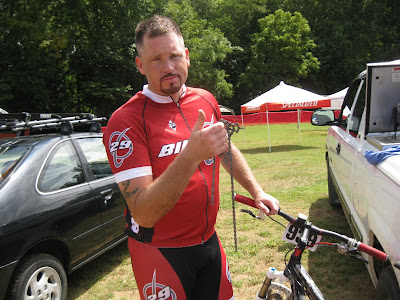 It wasn’t that bad, and I could actually afford (points-wise) to drop the race. Besides, I could buy a new chain and fix it later. And that’s just what I did. 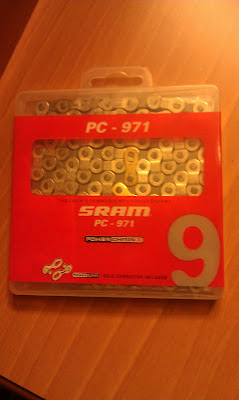 After the “race”, we stopped by a local shop and I picked up a new chain. Lunchbox and I weren’t going back home that day though, so I made sure I had a chain tool in my truck before we hit the road. I did, and I waited until we got to the hotel in D.C. to install the new chain. 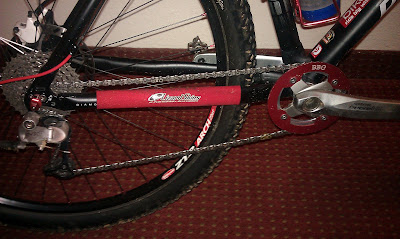 Nothing like a little hotel room bike mechanic work, I guess. We hit up a local restaurant, and I drowned my sorrows with a tasty beverage. 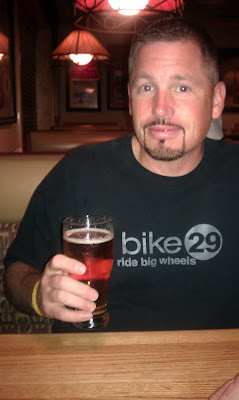 I would live to ride another day. It’s a good thing, because there’s another race this weekend. I wasn’t thinking about that though, because we were on vacation. We had lots of fun stuff planned, and I couldn’t wait for the next morning to get going. Speaking of the next morning, I’ll talk about the rest of our adventures tomorrow.