All Work And No Play 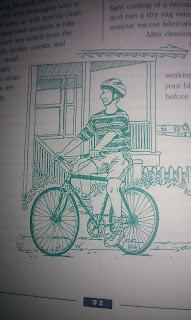 Is making me really freaking nutty.

I’ve been doing very little bike riding and a whole lotta trail work lately.  For some reason, I’ve been (re)inspired to get out and make something happen at Captain Jim Bob’s Space Adventure.  Since it’s literally in my neighborhood, it’s hard to leave all that empty land without trail on it.  I’ve been sneaking out there after work every night, and I’m getting quite a bit done.

I guess it helps to have the right tools. 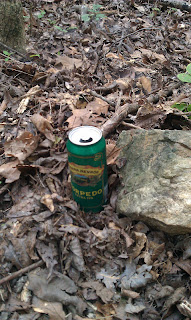 What, you don’t drink beer while doing trail work?

Since I got there a few times last week, I’ve kinda been hoping to get this going to the point where I can ride the new section.  Unlike the first section we built, this one covers quite a bit of ground.  I guess I’m trying to get in as much mileage as possible before I “open” it up for riding, even though I could probably take a small test ride now.  I’m striving for perfection, even though this trail will only be ridden by a few select folks (you know who you are.)

Roughing out the trail is the easy part, but I can’t stop there. 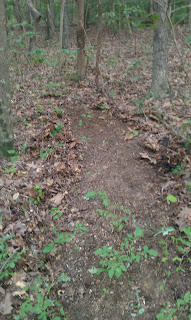 After getting the first section cut through the woods, I had to go back and do a little benching in order to make it flow properly (and make it last for a while.) 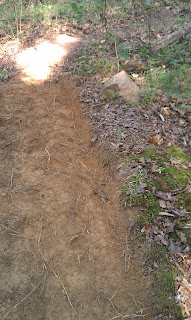 I had a few parts of the trail that needed bench work, and surprisingly I knocked it out with ease.  The next project was the rock garden. 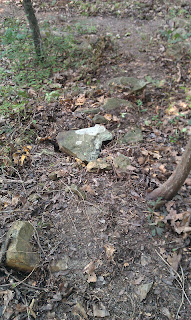 I know it doesn’t look like much in that shitty photo, but it’s gonna be a shitload of fun.  I still need to add a few more rocks to it, but flying downhill over those things is gonna keep things interesting.   I even made a go around for climbing (it’s a two way trail.)  I plan on adding many more features (both natural and man made), but for now I’m concentrating on getting the main loop completed. 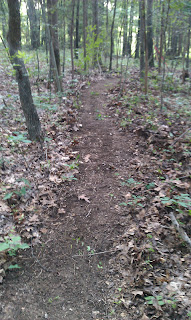 I can’t wait until it’s finished.  Maybe that’s why I’m out there busting my ass to get ‘er done.  After this Sunday though, I’m losing my main helper.  Lunchbox is heading to Florida for six weeks, so I may be out there all by my lonesome.  Maybe I can recruit some other help.

I haven’t really ridden much other than to and from trail work, but at least I’ve been keeping myself busy.  I probably needed a few days off the bike anyway, since I’m wearing myself out.  Plus, my knee is still sore from my crash last week.  I did get out to watch some racing at Fisher Farm last night, but that doesn't count as riding.

As for my race decision, I haven’t made up my mind yet.  I appreciate the comments and e-mails telling me what I pretty much thought I should do anyway.  Yeah, I’m leaning towards going all in on the SS for the eight hour race, but I may not get a chance to make that decision.  I have an unexpected family issue that came up, so it looks like I’ll be taking a trip to the D.C. area in the very near future.

If I’m not here tomorrow, then you’ll know why.