Two laps down, and a whole bunch to go.

I forgot to mention that when I started the Tree Shaker, I had forgotten my music playing device.  I yelled at Lunchbox to grab it for me out of my truck when I passed him on the first lap, and when I stopped to swap out bottle for my second lap…there it was.  I turned it on and listened to music during that fast, yet painful second lap, until it made a funny noise and shut off.

That’s about the time my back started hurting.

Anyway, I headed out for lap three, ready to settle in at a steady pace.  I felt pretty good still, and my legs weren’t even tired.  I kept hearing people bitching about how hot it was out there, but I was enjoying it.  Remember, I grew up in the Sunshine State, and I can ride in that shit all day long.

Nothing eventful happened on lap three, and I seemed to be making all the right moves out there in regards to climbing, picking the right lines, and recovering.  I even passed a few people out there that said I was crazy for riding a single speed.  Funny, I used to say the same thing to people before I started riding SS.

I came in from that lap, and my back had loosened up quite a bit.  I grabbed a little food to eat, refilled my bottles, and chatted with Little Miss Sunshine for a few minutes.  She had just finished her four hour race.  I eventually made my way back out for lap number four.  My break this time wasn’t as long, because I figured that I needed to keep going to prevent myself from falling over.

Taking a short break was actually a good idea, since I still felt pretty good as long as my legs were moving.  I noticed that I was on autopilot most of the time, which I guess was a good thing because it kept me from making stupid mistakes.  It felt like I was using The Force to guide me…

I popped out of the woods after that lap and started up the fire road climb back to the start/finish area.  I noticed that Lunchbox was riding his bike out there to catch a photo… 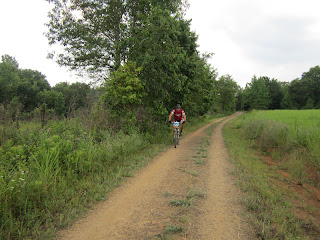 I rode through the pit area and made it to my tent, and Lunchbox had beat me there (he took a short cut.)  Since I was good and tired from four laps, he decided to go out there and ride one with me.  I was tired, so I took another break and refueled.  We eventually headed out, and I told him that I probably wouldn’t be riding too fast.  He didn’t mind that at all.

It was really nice of him to ride with me, and it really kept me going.  I felt like I had more energy, and we even had some good conversations along the way.  He washed out in a corner at one point and wrecked, so I had to stop to make sure he was alright.  It’s a race and all, but he’s still my kid and making sure he was okay was my priority.

He was unharmed (aside from a few scratches), so we got going again.  He pushed my pretty good up the climbs, and I pulled him along the downhill stuff.  We had a blast, until we got about two miles from the end of the course.  He told me his front tire was losing air.

Rather than leave him stranded, I grabbed a Co2 and blasted some air in there.  I didn’t see any obvious leaks, so I figured that he would be good enough to get out.  We hauled ass just in case, and arrived back at with a quickness.  I thanked him for riding with me, and I don’t think he realized how much that meant.  For him to push me along in an endurance race was really cool, and I’m not sure if I could’ve done it without him.  I took another small break and got ready to head out one more time…alone.

Lap six, and with the time remaining in the race I knew it would be my last.  I started out all alone but quickly passed a few people and ended up behind Sherry, the better half of the MadSS.  She was running the same gearing I was (but on her 9th lap), so she happily let me ride with her for a while (I also rode with her on the first lap for a while.)  She keeps a great pace, never slowing or speeding up.  I kept with her for quite a while, until a small hint of cramps got me on a climb.  I had to let her go, and I figured that I would suffer by myself until the end.

It didn’t take long though until I had some company.  The MadSS zoomed by (on his 10th lap) and I picked up the pace to keep up with him.  He looked as fresh as he did on the first lap, and I didn’t hang on long.  I was by myself again, with only a few miles to go.  I knew I would finish, but the cramps were getting worse.

On the very last section of singletrack, local single speeder Eric Hagerty came flying by.  With such a short distance left, I decided that I should give it all I had to get the hell back to the finish.  I stayed with him (and another guy) for the rest of the single track.  We kept a blistering pace, and for some reason my legs kept working.  I rocketed up the last steep climb (to get out of the woods), and the cramps hit me again.  I made it to the fire road, and spun my way back to the finish. 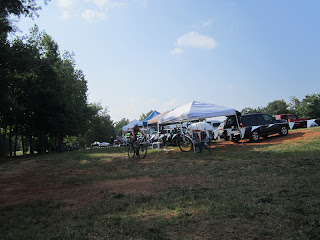 Almost sixty miles on a single speed in eight hours, and I was happy.  My goal was to push it and see what I could do, and I succeeded.  When the awards came out, of course I wasn’t included.  However, I got a surprise in the form of “not last place.” 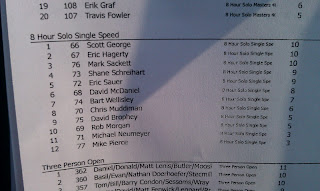 Good enough for me.  Have I mentioned that I really love this single speed shit?  It’s definitely making me stronger, and I think the fact that it was more difficult than racing with gears made the suffering even more fun.  I have lots of room for improvement, but at least now I know I can do it.

Maybe I can start training and getting a little more serious now.

Pffffffft.  I'm getting right to work on my "recovery." 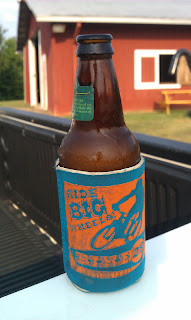