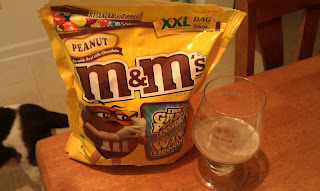 As you can see, my training is going quite well.  While the rest of the racing community is worried about max watts, Strava, caloric intake, and the like, I’m doing what I always do.  I like to have fun, and even though I have a few sponsors, that doesn’t mean that I’m being all serious about this shit.  I love riding bikes, and I’m not about to let hard work and “race training” ruin that for me.

I have been riding though.  In fact, da udda day I got to chase a couple of ladies from a local cycling team around the trail for a few hot laps. 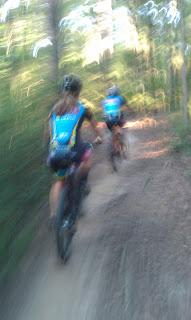 Me on a single speed, chasing those ladies up hill while trying to capture their image with my smartphone counts as training, right?

I’ve also been busy with trail work near my house.  No, not the trail I talked about a few days ago.  It’s the secret one that Lunchbox and I have been working on:  Captain Jim Bob’s Space Adventure.

While we worked our asses of to get the first part done, we’ve actually neglected it for quite some time now.  I got home early from work though, and decided that it was time to head back over there and cut some new trail.  We have tons of land to work with, so I started scouting out where exactly we could put some singletrack.

First though, we had to create another entrance. 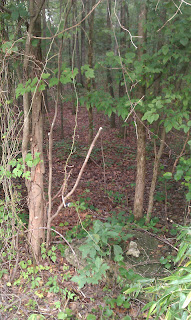 It might be a little difficult to see in the photo, but there is a nice rock between those trees to roll over as you go in.  The exit from the first part of the trail puts you out into a field for a few feet, and this will take you right back into the woods.  After clearing out a path, I started roughing out some new trail. 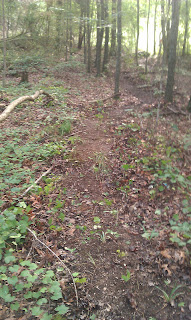 The area is really hilly, so I followed the contour of the hill upwards and across a few natural berms.  It really has a nice flow so far, and it is designed to be ridden in either direction.  It’s gonna be a tough climb, but it will be fun as shit to ride downhill.  I ended up getting quite a bit done out there in a short amount of time, and it’s really starting to turn into something nice. 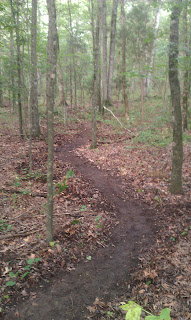 I’d like to get back out there over the weekend to get some more work done, and it just might happen.  I pretty much have all day Saturday free if I want, but Sunday I have something else in mind.

I’m going out to hunt for Bigfoot.

Yep, race number nine in the Southern Classic Series is at the Uwharrie National Forest.  It’s one of my new favorite places to ride, and I’m looking forward to it.  There is a shitload of climbing on the nine mile course, with plenty of super fast downhill.  I should be good and worn out after two laps out there, but luckily it’s kinda close to home (so I can get back in a hurry to drink some beer.)

How will I do?

How about, who gives a shit.

I’m just out there to have fun.