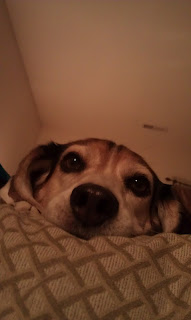 And I'm trying to come up with a plan for the weekend.  I’m on call this weekend, so fitting in a bike ride might be a bit of a challenge.  I can make plans, attempt to participate in said plans, and the whole thing could get messed up by the fact that I might end up at work.  I severely dislike this part of my job, but I have to deal with it.  I still should be able to squeeze in some two wheeled dirt action somewhere, even if I stay local…really local.

Work has resumed on Captain Jim Bob’s Space Adventure.  With Lunchbox all the way down in , I recruited another helper so I wouldn’t have to go out there and dig in the dirt alone.  My friend Tom lives just up the road a piece (that’s Southern talk for those of you that don’t know), and he offered me his trail building services.

We headed out to the trail with tools in hand, and mapped out the next section of our ever-growing trail.  We actually had a goal this time, and with two us out there working hard it seemed to be in reach.

I roughed out some stuff first. 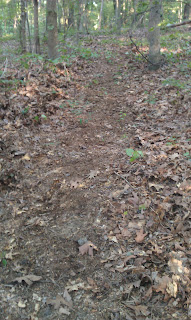 When I was walking through on the trail that had already been built, I noticed that we’ve already had some “other” users out there. 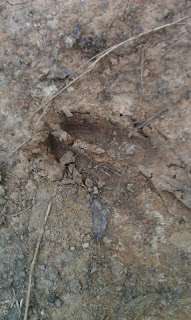 Now, where did I put my rifle?

We got a little more cut and finished, and we just couldn’t take it anymore.  A “flow test” was in order.  We rode it a couple of times, and I hopped off my bike quick enough to catch Tom in action. 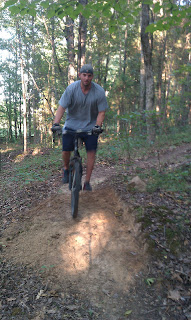 Satisfied with our work so far, we continued on.  The next section went over a natural berm next to a rotting tree trunk.  As we were digging around, we found a small snake trying like hell to get away.  I couldn’t identify it (since I’ve never seen that particular kind of snake before), and the little bastard was too fast for me to get a photo.  The whole time I’ve been working out there on this trail, I have to admit that was the first time I’ve ever seen any kind of critter out there (other than one squirrel that taunts me once in a while.)

Our critter find didn’t end there though. As I was working at the far end, Tom suddenly came running by me like he was Carl Lewis. At first I wondered what the hell was going on, but I didn’t have to wait too long to find out. Apparently he had stirred up a mess of hornets, and the little fuckers were pissed.

They ganged up on us and went on the attack. 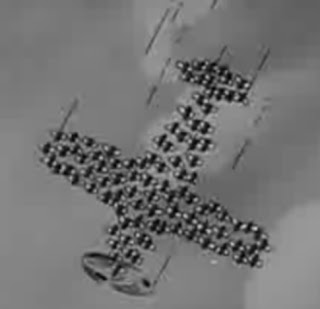 After getting stung a few times, we finally killed the main group that was after us.  Not that you can see it in this photo, but there were hundreds of them waiting for us to return. 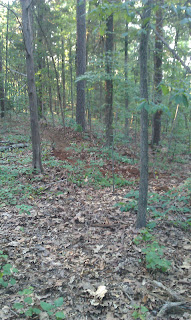 We weren’t getting anywhere near that shit though.  Tom had to drop one of his tools, and the hornets had taken a liking to it.  I plan to return with some high-powered hornet death spray to deal with them, and then I’ll retrieve the tools we had to leave behind.  We high-tailed it outta there.  Luckily, we would live to build another day.

That kinda sucked, because we were making some good progress.  Even though I can’t make any definite plans for the weekend, my main goal is to get back out there and get some more work done.  Hopefully though, that’s not the only place I get to ride.  While we have been working our asses off to build trail, there’s just not enough right now to make any kind of a decent ride.

Maybe I can sneak off somewhere and get dirty, and possibly come back here with some stories to tell.

With my knee still in limbo, I might be down for some diggin' next weekend!