But, at least I know how to get ready for a party. 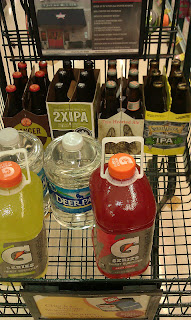 I’ve done a few endurance races over the years, so I guess I’m not a newbie.  However, when it comes to riding a single speed in an endurance race, I still have a lot to learn.  Rather than take the time to learn how to do it properly, my dumb ass just jumped right in.

I do that quite a bit though.

Saturday’s Tree Shaker was a chance for me to ride one gear for eight hours, and do as many laps as I could possibly stand.  Having no idea if I could even make it the whole eight hours kept it interesting.  By the time I checked in I found out that there were twelve people in my class, which meant that I was actually “racing” against other people.  And most likely, those people have done endurance races on single speed bicycles before.

I wasn’t nervous at all…seriously.

I still didn’t give a shit about how well I would do.  I was only concerned with trying to push myself out there for eight hours, and see how much pain and suffering I could stand.  From that moment on, I only cared about myself, because no one else was gonna pull my ass around the trail.  I think the only thing that helped me stay calm was the fact that I didn’t really care about anything else. 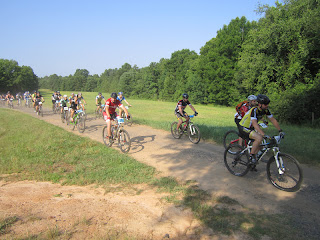 I kinda stayed mid pack, trying my best not to go out too hard at first.  Since I was riding on a 32X20, I couldn’t go that fast on the flat stuff anyway.  Just like every other endurance race I’ve ever done though, I got caught in traffic once I got on the singletrack.  Normally it doesn’t bother me too bad, but this time it did because of my lack of gears.  Being on a single speed, you kinda need momentum to get up the climbs, and being behind a bunch of brake riding dirt roadies I wasn’t getting a chance to haul ass downhill.  Not even a mile in and I was already frustrated.

At one point we came up to a long uphill section, and I decided that I’d had enough of riding behind technically challenged dirt roadies.  I tried to pass a few people on a short climb, but a small stump jumped out and thwarted my effort.  I busted my ass pretty good, and luckily I didn’t do any real damage.  All it did was frustrate me even more.

I passed a few people here and there after getting back on my bike, and ended up back behind the same “I’m too scared to go fast on the downhills” people.  Eventually I got around them, and that allowed me to set my own pace for the rest of the lap.

With all the traffic, I still turned a decent lap time.  I passed the start/finish line and made my way back to my tent… 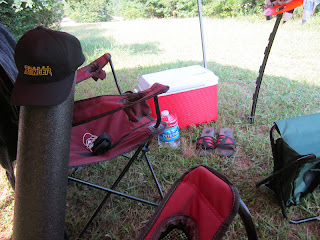 Normally I try to pace myself in these kinds of races.  I had a different plan this time though, which involved me riding my ass off until I got tired.  I stopped and swapped out my water bottles (it was well into the 90’s that day), and got my ass back out there for more fun in the sun.  I pushed myself and pedaled while the pedaling was good, and I actually felt pretty good.  No mishaps and my legs felt fine, but I did have one problem…

My back started getting tight.  Shit.

I stood up on the downhill stuff to stretch it out, and realized that I couldn’t keep up my “usual” cross country pace on a single speed for eight hours.  I decided that when I got back to the pit area that I would sit a spell and take it easy.  I eventually crossed the start/finish line and made my way back to the tent.

As I was getting my bottles ready for the next lap, a familiar face rode up to shoot the shit.  It was my fellow Bike29 teammate, Rich.  Since I was taking an extended break between laps, we talked for a good while about all sorts of things.  I don’t really remember though, because the riding I did for the rest of the day caused me to forget what we may or may not have talked about.

Was he even there?  Maybe I hallucinated or something.  Where was I?  Oh yeah, two laps in well under two hours.  Way too fast for an endurance race if I wanted to last.

I want this story to last too, so I’ll break it off here and continue tomorrow.

Come on, you know I can’t tell you everything on the first post.