I Find Your Interest Interesting 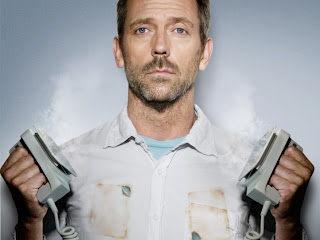 I post up about torturing myself on the single speed a couple of days ago and people come out of the woodwork to comment and send me e-mails.  It appears as if most of you are interested in seeing me suffer on one gear for eight hours tomorrow, which may or may not mean I’ll get a good story out of it.  Whether or not I do well, I guess it could be uh, interesting.

So, I guess that means I have to make my decision.

Well, it looks like I’m gonna be in town (for now), so I might as well go out in the hot sun tomorrow and pedal around during the Tree Shaker.  I wouldn’t call it racing, but I will have a number on my bike.  Knowing that I’ll have a difficult time out there even if I had gears, doing the single speed thing required a bit of a change… 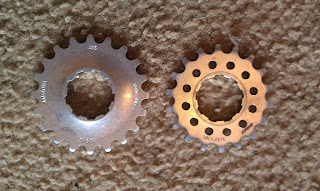 So I took the 18 tooth cog off to replace it with a big fucking pie plate.

A 20T doesn’t seem like it would make a huge difference, but I’m hoping a couple of extra teeth with help me survive out there.  Compared to the 18, it does look pretty big, but I guess it doesn’t look too bad on the bike. 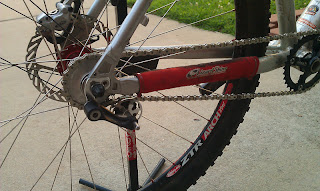 Since I’m running a geared frame as a single speed, it took a bit to get the chain tension right.  It’s not the best way to setup a single speed, but it does work.  I don’t plan on riding the 20T permanently though.  As a matter of fact it will go the hell away right after the “race.”  I won’t touch it again until Single Speed USA (where I’ll really need it.)  This is just practice for that anyway.

Speaking of practice, I haven’t even really tested out my new setup other than the standard up and down the road test.  Even though I have a trail in my neighborhood, I didn’t feel like riding over there.  I mean come on, I had beer to drink.  I’m throwing caution to the wind and hoping for the best.  Hopefully I won’t have any problems with it, and if I do it will just add to the fun tomorrow.

Will I finish an eight hour “race” on a single speed?

Will I drink beer between laps?

It’s not like I take this shit seriously, you know.

See y’all Monday, hopefully with some kind of “race” report.