Rollin’ With My Posse 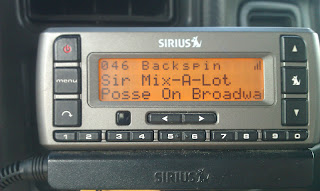 Turns out that this weekend I probably won’t have any free time at all.  That’s a great thing, since I’ve shown over the last few days that I good at wasting time when I have it to waste.  What?  Exactly.

Tomorrow, I have a plan.  My pal D-Wayne and his special ladyfriend invited Little Miss Sunshine and I up to Winston Salem for a road ride.  I know what you’re thinking…I do hate road riding.  So, why the hell would I drive over an hour away to ride on the road when I don’t like to do it out of my own house?

Because D-Wayne is good people, and I can finally give this coupon I won a while back to someone that will use it. 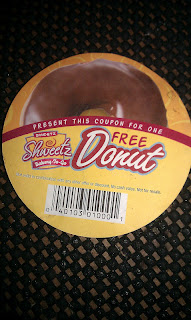 From what I understand, it won’t be a “regular” road ride either.  There are pre-planned stops along the way, for things such as breakfast, ice cream, and shuffleboard.  We may even drink beer while we’re out there.  While getting all kitted up and having breakfast kinda makes me feel weird, I think it should be a fun day.

I’m actually looking forward to it, mostly because I won’t end up wasting another Saturday.  I may have a tough time riding though, since I had a little accident last night. 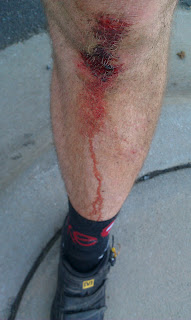 I slipped while climbing over a wet root at the last night, and fell pretty hard on my knee (I was still clipped in.)  While it may only look like a flesh wound, the real damage is to the bones in that area.  Right now it’s pretty swollen, and I’m having a difficult time walking.  I haven't crashed in quite some time, so I guess I was due.  I’ll have to tough it out though so I can play roadie tomorrow.

I had a good ride though.  I found a new section of trail out there that I’d heard about, and while it wasn’t difficult at all it sure was a shitload of fun.  It was an out and back trail, and the two-way traffic made it a little hairy.  Also, the trail abruptly ended because they are still working on it. 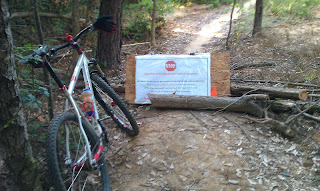 I ran into quite a few people I knew out there, and ended up riding the rest of the way out with my buddy .  He kept me going when my leg was hurting like hell.  Luckily, I made it out alive so I could obtain some “medicine.” 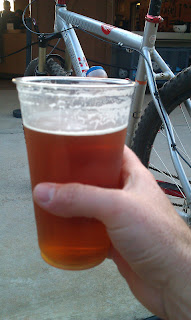 Yes, beer is the cure for crashing (or the cause of it.)

Oh yeah, this Sunday is Father’s Day.  Since I am a dad, I plan on spending the day with my boy.  Our plan is to do some trail work up at Fisher Farm in Davidson, and taking a few laps around the trail after that.  It may sound like a strange way to spend such a holiday, but hanging out with my son is always fun no matter what we do.  Besides, we can feel better about ourselves by helping out on the trails we like to ride.

Maybe we can even squeeze some time in for trail work on Captain Jim Bob’s Space Adventure.

I really love spending time with my kid, and not just on Father’s Day.  I’m not the only one either. 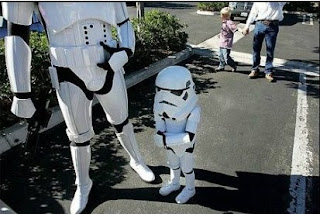 It looks like I have plenty to do this weekend, and no time to waste time.

I didn't EVEN THINK to find a place that has shuffleboard!! I'm on it!!