Other than buying Lunchbox a brand new goofy hat. 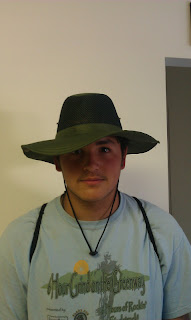 After doing trail work for most of the day on Saturday and getting in a ride afterwards, I woke up Sunday morning feeling really tired.  So tired in fact, that I felt like doing absolutely nothing at all.  If the weather is nice and I have the day off, I usually get out and ride.  This was the first time in a long time that I didn’t have any set plans, so I had a hard time even dragging my ass outside, let alone out on the trails.

After several cups of coffee (which I don’t normally drink), I finally had enough energy to go outside and look at the sun.  I started thinking about where to ride, but still couldn’t motivate myself to do anything.  Little Miss Sunshine had a dirt play date with one of her Dirt Diva friends.  Rather than cramp her style by showing up at an all girls ride (like I normally would), I texted a buddy of mine to see if he was down to ride.  He got back to me and said he would, but much later in the afternoon.  I had to find something to do in the meantime.

I realized that I had been having a headset issue on my single speed bike, so I pulled it apart to see what the problem was.  It was just a little loose, but I cleaned and regreased the bearing while I had it torn down.  That didn’t take very long, so I wanted to find something to do to pass the time.  I decided to head over to a local park near my house to check on some vacant land that could be used for a future trail.

I’m not going to reveal the location just yet, but I’ve been there a few times.  This time though, I wanted to give the place a thorough check to see if it was worth the time and effort to have our club put some singletrack in.   As I got ready to head out in the woods, my buddy texted me back and told me he was ready.  We decided to meet there at the park (since it is also in his neighborhood), and see what kind of trailbuilding opportunity we had.

Wow.  There is a shitload of land ready to be ridden.  There’s a ton of elevation change, and even a few natural features.  We scoped out the place for a few hours, and decided that it was time to get our shit together to create a proposal to get ‘er done.  I can’t wait.

More details when I have some.

I eventually went for a ride.  We headed over to nearby Poplar Tent, which I hear may close down pretty soon due to a potential ownership change.  For now though, it was ready to ride. 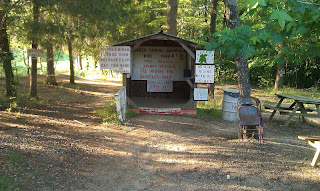 We stayed out there for quite a while, but I didn’t break out the camera even once out on the trail.  Of course, I brought my single speed, and I’m pleased to report that my mechanic skills are up to par.  No more creaky headset.

I did have one more thing to do though, and yes, it involved beer.  Little Miss Sunshine brought me home a couple of bottles of a local favorite of mine: 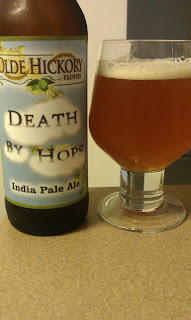 Death By Hops, and it would be a pleasant way to die.

That’s not the only reason I selected that particular brew though.  I needed a new bottle cap to replace the one on my headset, and this one seemed perfect. 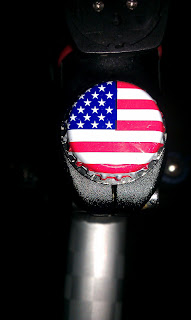 And yes, I’m done for the day.