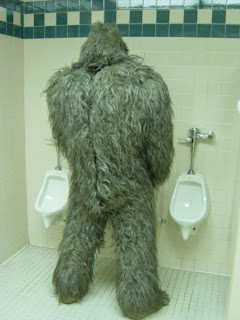 I was on lap two and it hurt like hell

But that’s nothing new.

Doing short distances on local trails and then trying to race a twenty mile cross country event was pretty dumb, but then I remembered that I’m not really all that serious about this shit.  When I finished the first climb on lap two, I started screaming down the fast descents again.  This time though, I had quite a few “oh shit” moments.  That was probably because of my fatigue, but it was still fun as hell.  I was still in third place, and no one was close enough behind me to push my pace.  I slowed down a bit to try to make it through the rest of the race, and I saw another climb up ahead.

Just then, I saw a guy lying down on the side of the trail.  I asked if he was okay, and he mumbled something about being tired.  I realized that it was the guy in second place I’d been chasing, so that lifted my spirits a bit.  I spun my way up the rest of the climb knowing that I was now in second, hoping that the next downhill section would come sooner than expected.  When it did, I gave it all I had.  It was over way too fast though, and I had to climb another steep hill.

I didn’t know how much longer I could keep it up.

Just before I got to the second section, a guy in my class I hadn’t seen since the start rolled up behind me.  He shouted, “Don’t quit now, Chris!” but I was already burning out.  We crossed a fire road and hit the next section, and my legs were starting to cramp.  I didn’t eat anything while I was out there (even though I took plenty of Honey Stinger products to the race), and I had almost finished the only water bottle I brought.  We came up on a downed tree on the trail, and I knew I couldn’t roll over it in my weakened condition.

I dismounted to get by, and I got passed because he still had the legs to roll it.  I hurried back on my bike to catch up, but he had a pretty good lead on me.  I pushed as fast as I could on the mostly downhill section, and struggled on the few climbs.  I couldn’t wait for this shit to be over, but I gave everything I had to get myself back in second place.

When I started seeing spectators, I knew I was almost there.  I pushed it again, but never caught up.  I rolled up to the finish line, and my kid was waiting as usual. 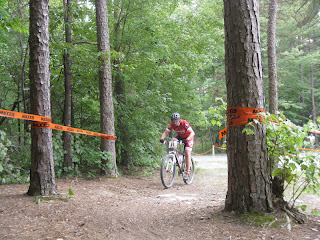 I thought I ended up in third, but I found out later that someone had gone by from my class.  I never saw him, but being as tired as I was it didn’t surprise me.  Fourth place overall wasn’t too bad I guess, but having a shot at the middle of the podium and then pissing it away kinda made me upset.  While I’m not too serious about this shit, working my ass off out there and coming up short still bothered me a little bit.

I spent the rest of my time out there wandering around like a zombie. 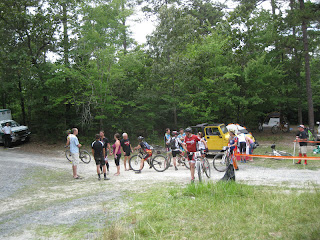 I was tired, and the trails at Uwharrie had kicked my ass.  I suffered through twenty miles of climbing, fast descents, and cramps, and I still had fun for some reason.  I pushed my limits, and that’s another reason why I like racing.  I could never work so hard on my own.

Now I have a little bit of free time until the next race, which means I can start planning some dumb shit, er training.

We’ll see how that goes.

And by "training", you mean "discovering newer and differenter beers!", right?

Amateur, try doing this shit everyday! No one ever brings me beer, they just want to kill me and hang me on the wall.