Bringing It Up North 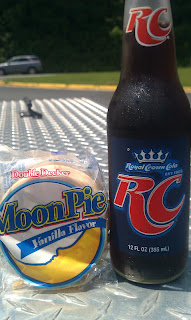 No, I’m not talking about my Southern charm or my penchant for chugging RC Cola and eating Moon Pies.  I mean, it’s really time to start making plans to bring my ass to Vermont this summer for Single Speed USA.  It’s less than two months away, and I haven’t even really thought much about the logistics of such a trip.

Sure, the portion of the trip that takes me to my in-laws’ farm near Buffalo, NY is all planned out, but after I leave there the Friday before the race, I have no idea what I’m doing.  I’m hoping to arrive at the Bike29 mothership in the early afternoon (if George is still there), but after than I don’t know where to go.  I haven’t even thought about my accommodations for the few days I’m there, although I have been looking around a little bit on the Internets.

Maybe George will let me sleep on the floor in the shop.

Since I’m really starting to think about the little details involving my summer adventure, I’ve turned my eyes to my single speed bike.  I’ve been riding a comfortable (finally) 32X18 around here and in the smaller mountain areas near Charlotte, but I’ve been told that may need something a little bit easier.  George said a 20 or 21 tooth cog would be better, but I’m having a hard time dealing with the fact that I have to make a change.  Even though I have no idea what the trails up there are like, I decided that I will go for a 20.

I just so happens that I got one of those fancy cogs sent to me from Endless Bike Co. 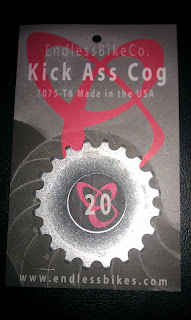 I’ve never used one of these, but D-Wayne told me that they are pretty good.  He also said that he has yet to tear one up, which is good news since I tend to put the hammer down when I climb.  I guess I’ll find out on my own soon enough.

I also bought a new chain (not pictured because chains aren’t really sexy), so the plan is to switch everything over sometime this weekend so I can get a feel for my new, smaller gearing.  I’ll put everything back to the “regular” gearing soon after, and swap everything out again prior to my departure.  I know for sure I won’t like such an easy gear around here, but I bet I’ll be glad I had it when I’m climbing in the mountains of Vermont.

Beer is next on the list.  While I’m sure that there are many fine brews available up there, I wanted to take the opportunity to bring some down south love up north.  So George, if you’re reading (you are, right?), I need a list of brews you can’t usually get your hands on.  Otherwise, you’re stuck with whatever I decide is best.  I guess either way won’t be a disappointment.

I’m really looking forward to my trip (and the race I suppose.)  I guess that’s why I’m talking about it so far in advance.  It should be a great time, and I can’t wait for it to get here.

In the meantime, I guess I’ll start drinking maple syrup to prepare myself.

Perhaps a literacola would be much easier to drink.
Posted by TheMutt at 8:25 AM