It was so bad in fact, that I didn’t even drink the beer I brought with me. 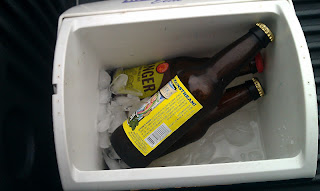 Yesterday’s Southern Classic Series race at Uwharrie was rough.  I went out there to have fun, and I actually did for the most part.  However, when I got there I knew I was gonna have a bad time. 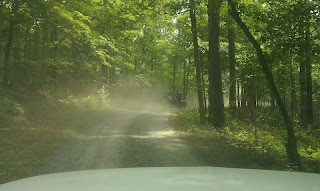 It was dry as a camel’s ass in a sandstorm out there, and every tire (bike and motorized) that rode across the roads and trails kicked up a cloud of dust that penetrated my lungs and eyeballs.  I was hurting even before the race started, and me and my bike were covered in a fine powder.

I took a warm up spin on some of the singletrack out there, and I figured that I was ready to go.  We lined up on the fire road and the groups started taking off.  When my group went off, the plan was to take it easy until I got through the first climb and onto the fast downhill stuff.  Of course, I didn’t follow my own plan.

It wasn’t my fault though.  I took off at a “normal” pace, and it seemed really slow.  In the short road section before the trail, I found myself in third place as we hit the trail. 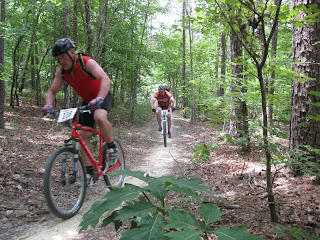 We hit the first of many climbs, and I did my best to pace myself so I didn’t burn out too quickly.  I was still right with the two guys ahead of me, and I even had a chance to pass the guy in second place.  I held back though, because I knew it would be a long race and I probably wouldn’t survive if I pushed it too soon.  Since I didn’t go for the kill (so to speak), I ended up getting passed by the guy in fourth place.  I was still with the group though, and eventually we left the others behind.  I was feeling pretty good, even though I was pushing myself a little more than I wanted.  We hit the first of many fast downhills, and I hauled ass without any regard for my own safety.  I pushed the limits of my handling skills and my bike, and it was fun as hell.  It was that moment that I realized why I actually enjoy racing.

It was also that moment when I passed my friend Todd on the side of the trail.  He was in first place, but a flat tire put him out of commission for a while.  I gained a little energy knowing that I was back in podium contention, and I mashed my way up the rest of the climbs.  I knew for sure that Todd would get his shit fixed and catch back up, so I pushed it even harder to gain a little time.

When I finished that first lap, I wondered if I could make it through a second.  I got up the trail a bit, and I saw Lunchbox hiding in the bushes waiting for me. 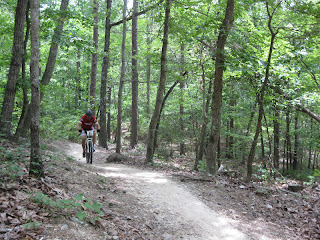 I mashed my way up the first climb, and I noticed something strange.  I saw an unusual amount of people walking in the opposite direction:  victims of fatigue, flat tires, and other mechanical issues.  I was shocked at how the trail was beating down the people trying to race on it.  Maybe Bigfoot was out there sabotaging everyone for his own amusement.


I knew I had to work hard just to survive.

Since I’m still pretty worn out from my Uwharrie adventure, I think I’m gonna cut this short and save the rest for tomorrow.  I like to drag out race reports anyway, so why should change that now?  It’s not like it’s that great of a story anyway.

Yes it was I who threw those rocks in your general direction.