Last Saturday (the day before the Uwharrie race), I had a whole day to myself.  That doesn't happen to often, and I had no idea what to do.  When I went to bed Friday night (actually early Saturday morning since Lunchbox and I stayed up late watching movies), I had a list of things I wanted to do:

Do some trail work at Captain Jim Bob’s Space Adventure

Change the worn out rear tire on my geared bike

Wash my truck and vacuum out the inside

Ride my bike somewhere to get lunch

When I woke up though, I didn’t feel so ambitious.  Although I got plenty of sleep, I was still tired as hell.  I fed the animals and thought about the things I wanted to do.  The big cat was relaxing after her breakfast, and I kinda felt like doing the same thing. 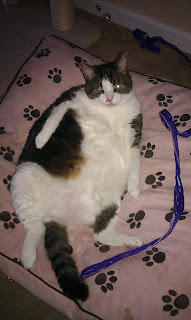 I ended up doing some laundry, which wasn’t originally on my list but still needed to be done.  I started thinking about having to race the next day, and that made me think I shouldn’t ride.  It also made me decide against trail work, since I didn’t want to be worn out on race day.

The rear tire on my bike would have to wait too, since I didn’t want to run into any issues with sealing it up and having a problem during my race.  After realizing that planning to race on a Sunday had fucked up my Saturday, I finally dragged my ass outside to wash my truck.

It was pretty dirty from, guess what, travelling to mountain bike races.  I got the outside all clean and shiny, and made my way to the interior.  It was a filthy mess, so I worked hard to make it good as new.  That took a lot longer than I expected, and at that point I had pissed away most of my day.  Shit.

I finally got out of the house, but that was only to buy some stuff to make for dinner.  I didn’t even touch any of my bikes, so I was a little bummed.  I guess it was nice to have a day to myself, but maybe next time I should make a little better use of my time.

So, why did I have all this free time?  Little Miss Sunshine was in the mountains for the Dirt Divas Spring Trip, and even though I was invited (they have Dirt Dudes that go) I declined.  The ladies were busy with their trail riding, pillow fights, enormous feasts, and dangerous whitewater rafting.

Yeah.  Just have a look at this photo: 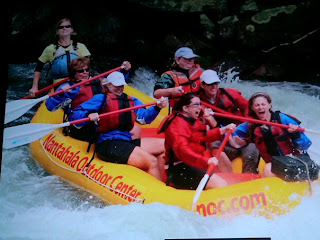 That’s Little Miss Sunshine on the left, and from the looks on their faces you'd think they were riding that thing off of .  That’s some scary shit right there.

Another Dirt Diva, Linda, sent me a photo of the bus they rode when they were out there.  It had something to do with me I guess. 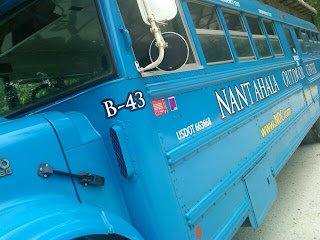 I could always use a transportation sponsor.

That way I can sit on my ass in style.

So now I am famous! Thanks for sharing the pic and gettng my name on there. Love your blog!!!